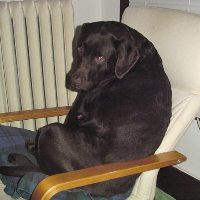 and she will be missed. This is not like losing a parent. This one really hurts.

I’m not one of those people who take the whole dog relationship too far; I mean I never lost sight of the fact that she was a dog. To me if you cook for your dog or ever take it with you shopping, you’ve got issues that go well beyond which heart worm pills to pick. But I loved her. I truly did.

I am an insomniac, so there were an awful lot of hours of Scooby and me sitting on the sofa while every one else was asleep, just waiting for the sun to come up, or to feel sleepy enough to walk up the stairs and both try and nod off in my bed.


The greatest thing about Scooby was that she agreed with me on everything. We both always believed that Eli Manning would be great, even when no other dogs did. We both loved the Mets, hated the Yankees, Republicans and my mother-in-law’s cooking. We both could watch the Tivo of Terrell Owens crying after losing to the Giants over and over again and we both believed the facts that my friend Kip was a gymnast in high school and is now a Prince fan is definitely connected.

We couldn’t stand Gerri, from the second season of Survivor, cried when they canceled Saturday Night Lights and detested Draco Malfoy, oh he is so smug. Scooby was convinced, and could not be dissuaded in her steadfast belief, that my wife under appreciated me.

She would love to hop in the car with me and take that right hand turn on a red light at Chatsworth and Myrtle. I used to tease her about how difficult it must be to buy a two piece bathing suit when you have 8 nipples, and she would give me crap about my limited abilities to lick myself.

There were some rough spots; it took me a long time to convince her that eating her vomit after throwing up didn’t really help matters and that I could take her on the golf course for a run, or she could continue to believe that duck crap was a petit four, but definitely not both.

She warmed my feet, greeted me when I got home, wanted to hump me when no other being did, and every once in a while would scare the crap out of herself with her own farts.

On Tuesday Night I came home from basketball at the Hommocks. Everyone was asleep but Scooby; she was breathing hard and she looked like my grandfather Izzy the last summer of his life struggling to get up to kiss the Torah while it was passed through the synagogue. I knew that if I walked up the stairs to go to bed it would be the first time in 11 years that I did it alone. I put a blanket on the floor next to her, and lay down. It reminded me of when Scooby used to sleep by my son’s crib, protecting him during his naps. If she was going to die that night, she wasn’t going to be alone.

The next morning she was dead. I knew I had to pick it her up and put her in my car, and that was as awful as it sounds. I wanted her to feel different, hard and rigid, not like the living being she used to be. But her head flapped and rested on my shoulder like I was carrying one of my kids off to bed. I didn’t want that, man I didn’t want that.

We took Scooby to Village Animal Hospital, a place where all the people seem to have the capacity to love each pet as if they were their own. The nurse at the desk saw that we were all crying, and tried to offer comfort by saying “She’s in a better place now.”

And I had to say, “Better place? better place?” She had no debt, no job, no spouse to fight with, all she did was lie on the couch, and she could lick her own privates to boot. Better place? How much better could it be?”