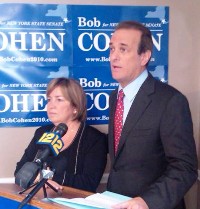 Saying that he didn’t want to cost the taxpayers any more money in an expensive hand recount, Cohen bowed out Monday morning in Mamaroneck with his wife, Barbara, at his side.

At last count, Cohen was about 600 votes behind Oppenheimer.

"I offer my sincere congratulations to Senator Oppenheimer on a hard-won victory," Cohen said in a campaign statement. "I am also enormously grateful to all my supporters in this race, including The New York Times, The New York Post, Mayor Mike Bloomberg, County Executive Rob Astorino, and so many others."
This will be Oppenheimer’s 13th term in the New York State Senate.