Do you think this was a good idea? Or not? The City of Rye chose not to publicize the following story of this coyote’s capture until nine days after it happened. 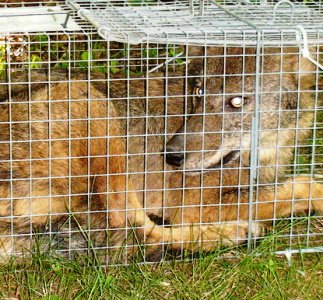 The photo of the coyote is seen on the professional trapper’s Facebook page . He says he couldn’t bring himself to kill the animal, someone not associated with his company did.

Give us your opinion on this:

A coyote was captured within the confines of the City of on Saturday, July 31, 2010.

The animal, a male weighing approximately forty pounds, was found at approximately 3:00 P.M. in a wooded area near . He was captured in a humane rubberized leg hold trap set by the Nuisance Wildlife Control Operator retained by the City, Jim Horton of QualityPro Pest and Wildlife Services. The coyote was not harmed in any way by the trapping process. In accordance with guidelines for dealing with coyotes and the terms of the City’s trapping permit established by the NY State Department of Environmental Conservation, the animal was euthanized. The carcass was removed by the trappers and will be submitted to for necropsy.

Information regarding the capture was not immediately released in order to extend the potential usefulness of the trapping location. Because of the scent left in the area by the captured animal, the City’s hired trapper, Jim Horton, was hopeful that additional coyotes might be captured if the location were left undisturbed. Police Commissioner William Connors said, “Wildlife experts uniformly say that it is extraordinarily difficult to trap coyotes during the summer; since Mr. Horton had success with this location, we were obligated to preserve it for as long as possible. Contamination of the area would have eliminated that opportunity.”

There has been a noticeable drop in coyote sightings; since July 26th, only two have been reported, both on August 3rd. “Although we cannot say the coyote threat has been resolved, or whether other factors are involved, we do believe our efforts have been successful to date in beginning to re-establish the necessary line of fear coyotes need to have for humans based on the capture of this animal, the decrease in reported sightings, and the decrease in reports of bold or aggressive coyote behavior toward humans,” the Commissioner said. He urged residents to continue to be aware of the possibility of aggressive coyote behavior, and to continue to take precautions with small children outdoors.

The City will continue its hazing and harassment strategy to include aggressive hunting and trapping efforts in accordance with the advice of the State DEC and will continue to evaluate the effectiveness of methods and tactics in order to ensure public safety.  The City will also continue to take the lead in establishing a regional, long-term approach with surrounding municipalities, the state and the federal government in dealing with this trend.