The idea of the white picket fence epitomizing a girl’s American dream seems an outmoded concept. 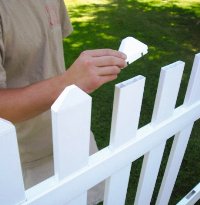 In my neighborhood you would think the steel workers union has a stranglehold on the place by the countless black metal fences surrounding most properties.  They aren’t there to conjure up images of hard-working Americans though, but more like Lords and Ladies of the manor encircled by the ideals of Kensington.

I hadn’t thought too much about fencing our yard as I loved the open, non-hostile shout-out to domesticated animals and the guys doing the lawn.

And it wasn’t the coyotes, all rabid and mad like some pent-up housebound types that forced us to make the call to keep certain things in and certain things out.  Nor was it our wandering, 10 year old dog Augie who isn’t likely to stray too far, but has been known to receive police escorts home on the back seat of cruisers.  A hairy perp of sorts, undisturbed by his growing rap sheet, knowing there is no college fund.

The caving in on a fence was a result of the most likely source: wayward children.

Like allowing my toddlers to enter the nicer rooms in our home with the hope that eventually they will be civilized enough to not race to turn over tables and climb atop the piano, I believed that with sufficient supervision we could have an unfenced yard without any casualties while instilling the respect that speeding cars demand.

But boo-hooing fences can be a grossly controversial topic for keeping people out.  Ask Rory Kennedy who has tried to stay out of the argument in her new documentary on the Mexican border and its floppy ineffective 700 mile fence.

Try talking sense to Freedom Fighters on the Fringe that put up their barbed wire outlaw fences but still feel the need to greet you with a shot gun.

Ignore The Great Wall of China, that even if you can’t really see it from space, you still believe it has the power to keep out the nomads and other potential enemies, which seems to include all but the Chinese.

Here in Westchester County, the fence, like your car and your handbag speaks volumes.

When I casually asked my husband to keep an eye on our twins while he was watering the front lawn and I was packing the car to take the boys to the pool, I suddenly heard shouting in the street and wisely  hid behind my car as the drivers from two directions jumped out of their vehicles having sandwiched the two and a half year olds somewhere between their bumpers.

One of the alert drivers was already on his cell, calling Family Services no doubt, and the other was screaming at my husband’s shadowy figure that was eclipsed by the bushes as he shut off the water spigot.

I was sure it was the same neighbors who often collared poor Augie perusing the ‘hood, grabbing a hold of his collar and calling our home on their cell phone conveniently located in their holster, I mean hand.

My husband’s talent of dismissing the busy-bee-tone of the driver’s was followed up by a call to Brother’s Fence Co..  Within a couple of days we had ordered our 4 foot tall cedar fence to be installed while we were on our family vacation.

Shouldn’t it be black metal Gothic, like everyone else?  I fretted that we would look like country bumpkins butting up against our neighbor’s statuesque Luxembourg Gardens style.

According to Cary Socci, the owner of Future Fence Co. in Mamaroneck, the stained cedar fence is back in style, replacing the white PVC (read vinyl) fences that were popular for awhile.  Mr. Socci doesn’t like the look of the vinyl fence, ‘shiny’, a word that wouldn’t apply to what we were hoping for which is a fence that actually looks a tad natural.

About the metal fences, they aren’t metal anymore, but aluminum, eliminating the need to worry about rust and repainting.  “That’s why people liked the vinyl too, they get dirty but you don’t have to paint them”.  We agreed we’d both make for ineffective Tom Sawyers.

And Mr. Socci has had lots of experience with chain link, not unlike the forgotten stuff we have lining our backyard, which for most of the year is camouflaged by foliage, but is rather prominent in winter and spring.  I took notice of ours after having pictures shot of my boys and myself frolicking in the crocus last year only to have the chain link in the background make it appear as though they were visiting me at the yard of the Women’s Correctional facility.

Mr. Socci installed his first chain-link at Woodstock, three miles of a six foot high fence and spent the next three weeks hanging with rock stars.

He said the fence was trashed after the show, keeping in sync with the overall mindset.

So the American dream has changed, but not completely.

I had to complete my fence conversion mentally and otherwise.  Where once you could set out the small plastic neon turtle waving a Slow Down flag, our neighbors stepped it up with custom made, stand-alone, white picket fences to be placed near your drive to discourage distracted motorists from plowing down family members.

We ordered two but opted out of the familiar metal sign many have– ‘Please Drive Slowly, We (heart)  Our Children’.