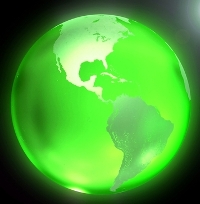 when asked what was in the box on the floor in the middle of their circle.

OK, they conceded, there were egg shells, coffee grounds, vegetables and newspaper clippings in it, too. Those just didn’t seem quite as exciting.

Showing off a compost bin was one of many ways the students at the Mamaroneck Avenue School celebrated Earth Day on Thursday.

"Today the goal would be that all the children talk about it," principal Carrie Amon said. "but every day is Earth Day."

While the school will host a table at the Larchmont-Mamaroneck Sustainability Expo Saturday at Hommocks Middle School, the Mamaroneck Avenue School students weren’t waiting until the weekend to share their ideas on protecting our planet.

A group of pre-kindergarten students presented the faculty in the main office with planting kits that included parsley and chives. The 17 4- and 5-year olds in Susan Longo’s class used a green bean sprout to explain the function of seeds, roots, stems and leaves before listening to Louis Armstrong’s "What a Wonderful World" during storytime. Another class visited the A&P across the street to recycle 665 cans and bottles. They’ll use the $32 they got in return to buy flowers.

It all centers on the school’s Mamaroneck Community Garden, which has roots several years old and has grown ever since.

"It was a school thought to promote healthy eating and to teach lifelong skills," Longo said of the garden’s origins. "You don’t always have to go to the store to get your food."

Thanks to a grant from the Rye YMCA, donations from several local stores, volunteers from the community, and a lot of hard work from the students, the garden has become a source of pride at the school.

"It started as a very small project," Amon said. "This year we’re really excited because it’s branching out. It’s really going to be a community program."

Two weeks ago, students from various classes mixed soil for the raised beds on the school grounds. On May 10, the school will host a planting day, which is open to the community. Later, the school’s "mini-scientists" will tend the crops and record the plants’ growth. Eventually, the students will celebrate the harvest, perhaps with a delicious and nutritious salad.

The hope is that families and members of the community will volunteer for tasks that need to be completed over the summer. And that the children will continue to learn. 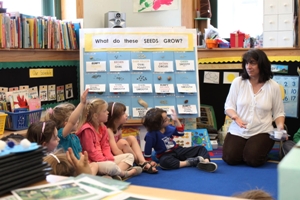 Tickets: $20 for adults at the door; no charge for children