This is the last column I will write on this topic. 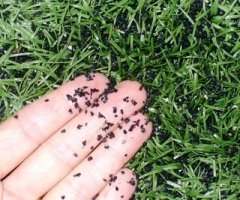 (editrix: Fields for Kids has announced an effort to raise $465,000 by November 1. we remind you this is an editorial opinion, though he swears up and down this is his last.)

It is no crime to be dumb. But In the case of Fields for Kids, it’s almost charming that so many like-minded people have found something to do together.

Let’s go back a couple of years to when we got stuck with rubber crumb black stain number 1:

The people who think they know better than us told us all that there is no danger to our kids, our fields, our water or anything else. But that wasn’t true. It wasn’t true then, and we KNOW it’s not true now.

According to the EHHI the dangerous compounds from the rubber fields do, in fact, sink into the ground and the ground water. And all you have to do is take a walk around Larchmont to see that the crumbs have found their way onto our beaches and into the Sound.

It was about then that the city municipalities of New York and Los Angeles BOTH had such doubts about the health risks to kids using these fields that they pulled all the crumb fields…ALL of them, out of their cities. Perhaps the first time ever New York and L.A. agreed on anything except that Yom Kippur should be a national holiday. I think the Los Angeles spokesperson said something like “no savings or benefits in the world are worth the health risk to our kids.”

We live in an area where if you are caught giving your kids tuna packed in oil instead of spring water, you are subject to public humiliation, and if you don’t pick up after your dog you can be flogged, yet the carcinogens from a rubber crumb field in our ground, in our water, in our ocean and possibly in our children, that’s OK. Why? Because Fields for Kids has a lot of money and they tell us its okay.

BUT THERE IS NO NEED TO WORRY. Why? Because in the big ad campaign that Fields for Kids is running for their new field initiative they announce NO CRUMB RUBBER, so everything is alright and safe, no? “Don’t worry, ignore the man behind the curtain.”  We can trust them, when have they ever been wrong?

A comment to my previous article pointed out that the Town and Village have  never asked for nor voted for either field, even though we will end up paying for both for a long, long time. In fact in the closest thing we could have to voting on this issue, the people of this area said “no.” You can say it was a close vote all you want, but there is no doubt whatsoever it was a NO.

And there is no doubt that the efforts to establish both fields were aimed at BUYING their way around the political system. Fields for Kids is pure and simply, a “lets ensure the wealthy get their way” organization. If you give money to Fields for Kids, you are subsidizing a wealthy-gets-their-way, side-step-fair-government-where-every-one-has-a-voice procedure. If I were a donor I’d have a problem looking in at myself in the mirror. But that could also be because I have a fat face.

Finally, the bigger issue regarding the current Fields for Kids campaign is the misguided and utterly selfish use of their fundraising. There are kids at Mamaroneck High School who go to bed hungry, who wear secondhand clothes, and get little educational support. Where is the campaign for them? In fact, the Fields for Kids campaign is now competing with the Hispanic Resource Center’s fall fundraising drive, an organization that is overburdened and desperate for funds. I also found out recently that when the County granted the Village a portion of the funds for Flint Park, there were strings attached: a requirement that the Village spend a certain amount on resources for lower income families. But when the money is donated privately, there is no such quid pro quo. Just another way that the haves screw the have-nots.

If these fields are so great, and so problem free, and we are going to have to pay for them for next eon or two, than how come we are not given the chance to vote straight out if we want them? Why does a vote scare Fields for Kids so much? My guess is that it’s because a vote represents what Field for Kids wants least: a fair decision, made by everyone, that benefits everyone equally.

Where are the people who are supposed to stand up for what’s right? Where is the Mayor? Where is the Mamaroneck Town Board, especially my friend and respected board member Dave Fishman, who does so much to help families in our community? Where is the principal of the High School, the football coaches, our celebrity baseball coach who is supposed to teach their players about fair play and doing the right thing? Where are the science teachers, or those who teach the fundamentals of our government, and all those who are supposed to be teaching our kids what is right?

And most important where are we? You, me, and everyone else who doesn’t have $20,000 to give to change the outcome of a public issue that should be decided publicly?

Famous Last Words Look, it is no crime to be dumb. In the case of Fields for Kids, itâ€™s almost charming Fields for Kids wants to raise money to build another dangerous crumb rubber turf field in Mamaroneck, men, Open