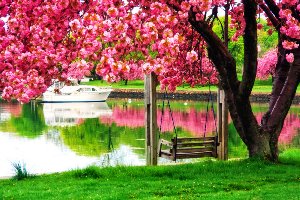 highlighted the Village of Mamaroneck trustees meeting Monday, which came – and went – in near-record time.

Mayor Norman Rosenblum is in Brazil.

As county leaders and the Army Corps of Engineers forge ahead with plans for a huge flood control project, Village Manage rRichard Slingerland said he too, is continuing to pursue options for nipping local flooding in the bud to the best of his ability.

However, Slingerland said he’s run into some roadblocks pursuing state and federal grants to help forward the cause, even to the point where grant applications for projects that will only curb, but not fully end, localized flooding have been rejected.

“The federal government is being extremely tight on how we move ahead,” he said.

Let’s just hope that has no impact on Harbor Island’s gorgeous cherry trees, whose special status trustees formally set in stone Monday in approving a resolution stating that Kwanzan cherry trees will be the only tree species allowed in the grove.

Any other type of trees standing in the grove, which stretches from Orienta Avenue to the hostoric  wastewater treatment plant, will be moved elsewhere within the park.