For the second year in a row Mamaroneck High School students were successful at the Future Business Leaders of America National Leadership Conference . 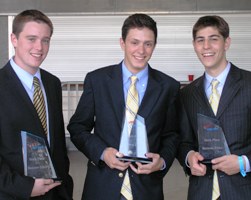 July 14th-17 in Nashville,  Harrison Cain, Giancarlo Riso, and Rory O’Connor competed in Business Ethics and were awarded 6th Place in the country.

The Business Ethics competition consisted of being given an issue or controversial business scenario, then having 20 minutes to prepare a presentation on what they would do in the scenario. The topic for the final round: an employee stealing a few dollars from the company  by using personal expenses on the company credit card. Mamaroneck’s team decided that making the company card a debit card would work better so they could review the spending.

“The anxiety of the moment when I was on stage waiting for them to call my name, and being handed an award, was one I cannot describe,” said Rory O’Connor, one group member. “ All three teammates have graduated high school this June and the award was a great closing to an already amazing FBLA career.

Before even being able to compete on the national level, these students first were required to compete at a state level and either win first or second place, which they did this April, winning first in New York State.