The lunchtime crowd at LTs was still digesting the news about LT’s arrest on rape charges, but some were further along in the process than others. 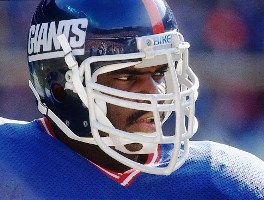 Lawrence Taylor, a former Giants star and Hall of Fame linebacker, was accused of raping a 16-year-old runaway from New York City. The girl was allegedly delivered to Taylor’s Montebello hotel room by a pimp.

"I’ve always liked Taylor," Larchmont’s Jim McDonald said at the Larchmont Tavern. "I want to find out more before prejudging the whole thing. … I hope it works out for him one way or the other, and I hope she can get her life turned around."

Paul Miklus, an attorney in Larchmont and a Taylor fan, was looking at the news from a legal perspective.

"If you know the law, you know that you have no out," he said, referring to the victim’s age. "You’re cooked."

Miklus and O’Shea both said they would continue to cheer for the Giants.

"I like Lawrence Taylor; he’s a great player," Miklus said. "It’s hart to imagine him getting involved with these types of people."

The reaction at Walter’s Hot Dogs was much the same.

Calvin Barksdale of White Plains said he’s been a big LT fan for a long time.

"He’s human. You can’t put him on a pedestal just because he’s a great football player," he said. "He really messed up this time."

Willie Nixon of Mamaroneck was saddened by the news.