With hazing of Mamaroneck High School freshmen apparently on the rise, parents, school leaders and police are 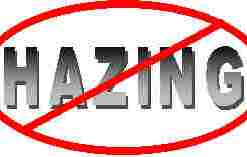 taking steps to keep the upcoming Halloween weekend – long known as prime time for such incidents – from turning ugly.

“Hazing is definitely a crime,” said Det. Robert Reynolds, the Town of Mamaroneck youth officer. Incidents of older MHS students hazing freshmen seem to be more prevalent this year than in the past, he said.

In fact, theLoop has learned that one local family, whose son was apparently "hazed" already this year at MHS, has met with the Westchester District Attorney and is considering filing criminal charges. The family does not want to go public about this. Alleged hazing incidents reported by residents last June  received quite a bit of response from loop readers.

Students involved in such activity could be charged with anything from a violation to a class A misdemeanor depending on the incident, Reynolds said.

Parents, who have reached out to school officials for help, say their freshmen children, primarily boys, have been chased, had food thrown on them and been forced against their will into cars at the hands of older kids, at a rate that is particularly alarming.

Bracing for what is known as “Freshman Friday” – the Friday night before Halloween during which hazing commonly takes place – parents this week reached out to MHS and district officials for help, asking them to make the safety of their children a priority.

They said outreach and intervention on the part of the school and police are vital because targets of hazing rarely speak up, fearing they may ultimately pay a bigger price for “ratting out” an offender.

“We encourage you to adopt a zero tolerance policy for anyone associated with hazing, threatening or terrorizing other students,” a letter drafted by parents said, adding that the warning signs of future activity are there.

“Recent news events should serve as a further word of caution and a fortuitous opportunity for intervention before a student in our school district is seriously hurt – or even worse -as a result of preventable bullying,” the letter said.

The parents, who did not want to be named, said they were pleased with the school district’s response, which includes working with area police departments and a recorded telephone message going out to all homes with high school age children Tuesday night.

“We are taking proactive communications measures this year to encourage parents to discuss the issue with their children and to reinforce our message that this kind of behavior will not be tolerated and that there will be consequences,” said Debbie Manetta, the Mamaroneck School District spokeswoman.

Lt. Antonino Rigano, Village of Larchmont police department spokesman, said his department, like the Town of Mamaroneck’s,  plans to beef up patrols this weekend, particularly in places, such as Fountain Square, where hundreds of older teens are known to gather on Halloween weekend nights.

“We’ll take steps to make sure they don’t cause any damage and that they don’t get into fights,” he said.

Parents of freshman said they hope such measures will enable their children to enjoy their Halloween weekend without falling victim to older kids’ pranks – or worse.