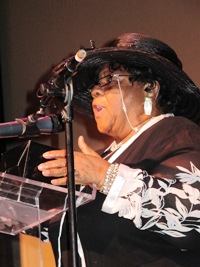 During the program, which played to a full house, chairwoman and Larchmont trustee Anne McAndrews told her audience she was placing a basket for financial contributions just outside the room’s exit. By the end of the evening, the basket was full of bills.

Andrea Stewart-Cousins, featured speaker and NYS senator from the 35th district that includes Yonkers, picked up the combined themes noting “how fragile our lives are. They can change in a blink of an eye.” And the measure of our human stature, she said, is “our capacity to share”and our “capacity to do.”

Doris “Mother” Jackson, the evening’s recipient of an award for an individual who lives the ideals of the late civil rights leader suggested that the real spirit of  Dr. King is “Don’t let anyone go hungry.”

Three Mamaroneck High School seniors from Kids for World Health — Jake Feinman, Emily Wharton and Sarah Comerford — in accepting a Martin Luther King, Jr. award for their organization talked about the importance of providing medical education and assistance for those abroad who can least afford it.

PROGRESS BUT MORE TO DO

Talking without notes as she moved along the front of the stage, Senator Stewart- Cousins compared human rights progress today with where it stood when she was young. She said that in the 1960’s it was impossible for an African-American to become a delegate to either the Republican or Democratic convention. “Today, we have a president who is an African-American. How quickly things can change when minds change.”

She allowed there still is “a lot to be filled in and that’s our job.” She said that giving our children a good education is key. “You can’t force people” about what to

believe. “They’ll just push back and the lesson isn’t learned. You have to preach and teach …and show them.”

She said her own parents weren’t completely comfortable about the efforts of Dr. King. They wondered whether “it could lead to trouble” and “maybe the best you can do is be quiet.” But that wasn’t her choice.  She grasped the tools Dr. King championed of “persistence, understanding and action.” She said she knew these tools wouldn’t be hers “until I lived it.”

She is credited with authoring and helping to push through the Westchester County Human Rights Law when she was a County legislator.

A LESSON IN GIVING

When it came Mother Jackson’s turn to talk, she said that as a young child her family “lived in a shack in New Jersey with no running water, no heat, no electricity and no indoor toilet.” It was at this time she learned a lesson about giving. She said one day she saw a familiar elderly woman who lived a few blocks away get into distress trying to cross a busy street in front of the Jackson’s residence. Out of concern, Mother Jackson got her mother to go out with her and help the woman cross safely.

Some time later, her parents announced that the whole family was going to move to a new place, an apartment with heat, water, electric lights, bathroom, TV and a separate bedroom for her. They had a benefactor, it turned out. It was the elderly woman. She had the connections and clout to make the move possible. “Sometimes something you give is small for you, but can be big for the other person,” Mother Jackson said.

She urged youth in the audience to “continue your education. With education, doors will open. And help the poor. Help the elderly.”

Other highlights of the program were:

·         A special recognition for recently retired executive director of the Community Action Program (CAP) Center Beverly Brewer-Villa for her more than 30 years of social service to the community, presented by Keith Yizar

·         Spirited singing to a drum beat of the African song, “Sizambe Nae,” by a children’s choir from Sts. John and Paul Parish under the direction of Rasaan Bourke

·         A rendition of the folk song, “Hope” by the Mamaroneck High School String and Woodwind Quintet

·         An explanation of “What this Evening is About” by Cora Rust in which she said, “it is a tribute to Dr. King…..to raise our conscience to eliminate racism, poverty and war”

·         An introduction of  Mother Jackson by Rev. Richard Allen of the Mamaroneck United Methodist Church in which he quoted Dr. Robert Schuller, “Find a need and fill it. Find a hurt and heal it”

·         A series of  short praises, poetry and a song by Mother Jackon’s nephew and granddaughters

·         Presentation to the Martin Luther King award recipients of  proclamations from virtually all local political leaders including a special urging to the audience by Larchmont Mayor Liz Feld to give generously to Haiti relief and a statement by State Assemblyman George Latimer, “Dr. King is not dead: he is alive through all of us here tonight.”

The evening’s program was hosted by the Mamaroneck-Larchmont Human Rights Committee under Mamaroneck Town Supervisor Valerie O’Keeffe with coordination from Anne McAndrews.