This year’s US Open theme?  It Must Be Love.  Was someone paid for this?  Considering the slogan it was no surprise that 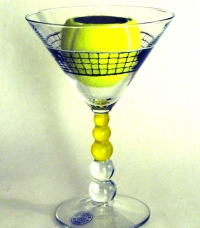 We got tickets for this year’s Open which began August 30th when my spouse and I happened to meet a guy –a TV producer that does reality weddings!—who had bought the full series package, and then kept the best stuff and sold the rest of the seats.  He was guaranteed finals tickets and overall better seating than individual ticket sales.  We picked Monday night a month ago—Round 4- of course not knowing who we were going to see.

Thinking we were clever to purchase these, I found out after having attended Monday night’s session starring Roger, that there are a lot of people that are sitting courtside in corporate seats—neighbors, friends- trumping your little 2nd hand ticket purchase.  Why should this surprise me when your own grade school raffles off the front rows at school concerts so your kid can yell at you if you’re not the lucky parent that’s spitting distance from the action.

Security is tight this year.  We had an easy drive over the Whitestone Bridge and paid $19.00 to park at Citi Field, taking just a few minutes to pass the subway overhead pass and onto the grounds.  But they didn’t open the gates until 6:20 for a 7:00 night session, forcing us to stand amongst grown-ups dressed in tennis outfits.  No, this isn’t a Mets game folks and you’re not six, which might make it perfectly ok to dress up like one of the ball players.

Sadly there was talk amongst them of racing to the Ralph Lauren store inside the gates, one of the official sponsors who will happily outfit you in gear you can get for half price on the net, if you dare wear clothes with a pony the size of the real thing.

After spending $10.00 on a Gray Goose martini served in a fetching plastic martini glass with three olives and floating ice bits, we made our way over to the Patio Café instead of eating at the concessions.

They were asking $14.00 for a 5 ounce glass of wine in a plastic tumbler to wash down your $28.00 lobster roll salad sandwich accompanied by cold fries.  Wilbur our waiter was sweet but could not be held culpable and was therefore ineffective in our quest to get more wine for less money.  With security checking the bags the way they did I was relieved not to have stashed a flask, but still.  Whoever said being entertained in New York was cheap?

We started off seeing from a birds-eye view from atop an adjoining stadium the end of a doubles match featuring the winning Brian twins, Bob and Mike.  After seeing these two featured on 60 Minutes with their inseparable lifestyle, living, working, dating together, I couldn’t help but to think that if they were   conjoined twins they would have opted out of the separation surgery.

Meandering over to Arthur Ashe stadium, we took our seats in the passable pavilion level to watch Domonic Cibulkova of Slovakia beat Svetlana Kuznetsova of Russia in two sets.  The scoreboard read like a Tolstoy novel.  Where’s a Billie Jean, or a Chrissie Everett for that matter?

Although the crowd tries to be horribly polite during play, when you are waiting for Roger and his handsome opponent, Austrian Jurgen Melzer, the crowd also urgently cheers for either pony-tailed grunting girl to win so they will get the hell off the court.

The announcer, a French, sort of Peter Sellers as Inspector Clouseau, was yet another non-American spin in the mix.  But he was hugely successful in shushing the heated crowd with a dubious, “Thank you”.  Pause.  “Thank you”, when amateurs, not me, relentlessly cried out Roger’s name.

The big screens via the Jumbo-Tran let the crowd know that Cameron Diaz, was there along with Bobbie, the big guy who used to dote on Uncle Jun’ in the Sopranos.  Whipping out my binoculars I found them in the same corporate box, Bobby accompanied by a Tony sister look-alike.

Alex Rodriguez’s big face on-screen prompted mostly booing, but I heard later that he had invited Roger to the Yankees game the next night.  What a sport.  Like Roger would have a tough time getting a ticket. I would have had some respect for the guy if he had figured out how to hold onto Madonna for more than one night.

After watching Roger handily beat the forever perspiring towel laden Melzer in the first set without breaking a sweat, I kept my binoculars on him in order to study his ballet like footwork.  A friend told me the next day that she had gone during week one, the qualifying week where you can watch the players practice up close and often get their autographs.  She had seen Roger just feet away and without solicitation said that even at 6’ 1” there wasn’t an awkward thing about his game.  She didn’t mention that it would was unsettling to be that close to him.

The match, not considered late by night session standards was still going on at 10:45 making it way past our bedtime for a school night.  I wondered how the players did it.  Did they take a nap at like 5:00?

And then I heard an interview Roger gave on the BBC, and it went something like, “Being a teenager is different than being 23, and being 23 is very different to say being 28”.