An overflow crowd of about 80 Larchmont Village merchants, professionals, Trustees,  other government representatives and interested residents 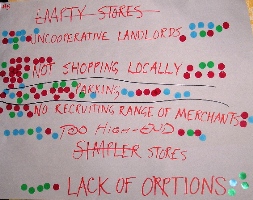 The Session was conducted by Jeffrey Shaffer, a Larchmont resident and partner of Flywheel Accelerated Solutions, a marketing firm specializing in developing solutions through collaboration.

Opening remarks were made by Jeffrey Rosenberg of Citibank, the President of the Chamber of Commerce, as well as Josh Mandell, possibly Larchmont’s next Mayor.  Mandell’s message to the group was that fixing the "broken downtown" would be a priority as he takes office, and that he will listen to every suggestion offered up by Village merchants and the Chamber of Commerce.

Mr. Shaffer’s promise was that, by the end of the 2 1/2 hour meeting, the group would identify the most pressing issues for the Chamber to address, as well as opportunities and ways to resolve them.

Using giant charts and voting by placing big, colorful dots on the list of issues they compiled,  the attendees agreed on the key issues facing local merchants.

According to Shaffer, "the best part was while everyone came

Finally, working groups were formed in each of the problem areas.  They will report back to the Chamber of Commerce at its next meeting, and solutions (such as a comprehensive Larchmont Village website to promote local shopping) will be presented to the Village and new mayor.