The summer vacation is more of a mirror of where you are than where you like to go.

Hence the flapping of jaws over the First Lady’s trip to Spain.  It was great fodder for the ‘who the heck does she think she is’ crowd, the crowd that knows her least. 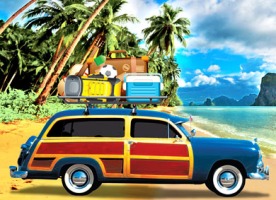 The only flapping of jaws I got while in Spain was from my in-laws calling during our honeymoon to ask how it was going.

Michelle Obama should have taken a family vacation like we just did, loading kids, dog and luggage into a minivan in order to drive 800 miles to visit relatives and a rented lake house, sight unseen.

But even stateside there was wrist slapping for Mrs. Obama for having the audacity to wear shorts while visiting the Grand Canyon.  I doubt a cover-up like the burqa would have gone without comment.

But no one could have wagged a finger at her for driving through Middle America.  Nobody could have harangued her for booking a night at the Kalahari Resort and Water Park in Sandusky, Ohio.  And imagine the sympathy she could have generated  after driving 9 hours, car speaker softly announcing, ‘Destination on left’ , only to be stopped on her way to the bar and forced down to the basement to avoid the tornado ripping through the Heartland.

Imagine the poll ratings when people found out she was standing shoulder to shoulder with half naked people dripping wet from the water park fun, while her young children cried and her eldest went missing, himself, half dressed.

The Queen of Spain was nowhere in sight.

With the exception of the family beach house, lake house or cabin that’s a given destination, some of us flounder, looking for the right place, not only for our petulant spouse and kids but for the crowd that you think wants to spend time with your clan.

As an interloper in the Hamptons for years, I finally convinced my husband who had enjoyed ‘shares’ since his 20’s, shacks in his 30’s and crazy over priced cottages in his 40’s that the posing was over.  If you want to feel lousy, have your kid get thrown out of the East Hampton camp for kids; back-biting is only allowed for those over 21.  And attempting to reach out to Alec Baldwin, pre 30 Rock, still in his Kim Basinger years as he lumbered by me on the beach, only resulted in buying more overpriced clothes at Calypso.  It was time for something new.

During these fiscally, often self-imposed tight-fisted times, the majority of us still planned to get away this summer.

The 2010 Gallup poll on travel spending reports that there are only a few insignificant percentage points between those that are cutting back on costs, and those that are actually spending more.

Not surprising, those that are spending more are in the 18-34 year range, (see above, zero off-spring) where as the people, who really need the vacation most are spending less (chronic sufferers between 35 and 54).

Like the first family’s current sojourn to Martha’s Vineyard, we used to visit the island, post Hamptons. For years we stayed with friends from Washington, but our welcome mat wore out. The husbands were annoyed by the lack of R&R, sex, and paradoxically, time alone by themselves.

For the past dozen years we’ve spent the Labor Day weekend in Delaware in a large house on the beach.  This year I got an e-mail in April suggesting we make other plans. Was it the au pair we brought last year or the fact that we didn’t have one this year to bring?

Relieved that I wasn’t the First Lady reading about myself on-line after getting dissed, again, we had made our plan to drive to Wisconsin and did survive the tornado along with the semi-‘s on Route 80.  A family education includes explaining to your young passengers what the sign on a truck, ‘Show me your Hooters’ means.  It’s no trucker’s delight to find you have switched seats with your husband who does just that.

This year’s house in Green Lake was helpfully chosen by the realtor we found last year after arriving at a shack I booked through VRBO.  The owner’s idea of safety precautions for small children was florescent construction tape around the spiral staircase.  Our eldest referred to the dilapidated wooden deck as the poop-deck of this rickety ship since no one had bothered cleaning up after the last dog that was there.

Not much of a camper, I could understand the allure of what more than 285 million visitors this year, (according to the National Park Service), would see in pitching a tent.  At least you knew to bring your own sheets.

In the course of exchanging vacation notes with glamorous travelers, I‘ve had more than one person raise an eye brow to the retro family vacation.  One asking, ‘where’s the payoff?’

During the family years when your kids have to go where you take them, they are endowed with irreplaceable family secrets and the invaluable bragging rights of their own fond memories—Max our oldest insisted we drive each of our house guests past last year’s rental-disaster so he could regale them with horror stories.

It would have been the perfect trip for Michele and her family, stopping first in Chicago to see friends before disappearing into Wisconsin.  I couldn’t guarantee her the same anonymity, but I could assure her that on date night, she could have felt like one of the best looking gals at the County Fair Tractor Pull.  Even if her husband insists that she indulge in a chocolate dipped frozen cheese cake on a stick.  Unless of course that sounds a little too much like the campaign trail.  Destination does eventually dictate destiny.

Kim Berns is a writer and interior designer living in Rye