This warm weather has not only allowed some of us to stop sending hate messages to people that took ‘Easter’ break in a tropical climate, 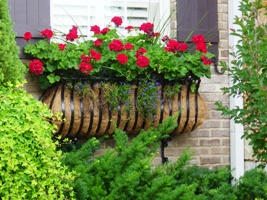 but has allowed for the early spring cleaning of patios and decks.

A month ago I cleaned out the flower boxes and pots on our back deck and front porch and loaded up my cart at Home Depot with some pretty good looking pansies.  A flat of 16 8inch pots was $8.49.  Instead of doing the math, I eyeballed the number of pots I thought I needed and ended up with leftovers that forced me out into the winter ravaged garden.

Rick, the owner of Mangone’s in Mamaroneck knows the big box phenomenon of flower purchasing for the novice:  “buy them cheap and replace them two or three times if you need to”.  Rick won’t sell plants before the ground is ready for them.  And although you can certainly plant pansies now because they can withstand a frost, he said people were flocking to Mangone’s in the last couple of weeks, anxious to buy impatiens and begonias just because they were wearing shorts—he says Mother’s Day is the rule of thumb.

But if you couldn’t take one more day of waiting for spring while shaking off yet another missed school holiday get-away, then like me you go in knowing that once the pansies get leggy (some time in June) they get replaced with an annual like geraniums that are the fool-gardener’s foolproof plant.

Maybe because we had record rain fall last year that put the kabash on running around in sandals until July it was necessary to bring them out in April.  I’ve been complimented more than once on my hardiness when the temperature was maybe 43 degrees, but the sun just so damn warm that you could swear you were in Mexico.  I explained to a sandal-commenting stranger my distinct need to believe it was really Spring and this included self-tanners along with open footwear and outdoor work.  Her eyes lit up as she reminisced about floating around Tony’s Nurseries in Larchmont with a cup of coffee, just eyeing the possibilities.

At Tony’s, Sharon was happy to show me around chatting about how she likes to grow monster plants at home, like 10 foot tall Sun Flowers, while most folks went for the impatiens because they don’t require a lot of sun and grow so rapidly.  She also showed me the early spring vegetables to plant, like lettuce and cabbage and brussell sprouts.  You can plant these now; they take about 50 days to grow.  The tomato and basil type plants are on the same Mother’s Day schedule as the annuals, and also take around 50 days.  Sharon explained that the pricing is different from different growers.  As an example, for $2.49 you get a 6 pack of tomato plants.  That’s truly petty cash when you consider that you could get maybe three sips off a Pina Colada for that price if you were on vacation like everyone else.  And what would you have to show for it now?

If you really want to cut corners you can plant seeds instead of plants.  Occasionally I’ll get a free pack or two in the mail from a solicitor, like an insurance company.  I always throw them into the soil hoping something magical will happen like Jack’s beanstalk but I have yet to see results.

Vegetable gardens no t only need lots of sun, but in Westchester County as in other places across the country, you need a marksman on the premises to scare off deer and coyote.  If this rubs you the wrong way, Rick at Mangone’s suggests you go for the organic deer solutions instead that come in cinnamon or garlic, evidently two spices abhorred by deer universally.

And don’t forget to buy a big bag of Organic Sweet Peat which leeches into the soil.  “Use this instead of mulch”, I’m told by Sharon.

For the more ambitious types that may have lost a tree or two in the storm in March, you can purchase a maple that’s 12-13 feet tall (already), or an 8 foot weeping cherry which I am having installed in my front yard today.

In our household, tree envy trumped vacation envy, at least this time.

Kim Berns is a writer and interior decorator living in Rye.