Once again it’s Walk to School Week for my third grader, Max.  I’ve heard that this is a fairly new practice aimed at grade school kids who spend too much time carted around in SUV’s. 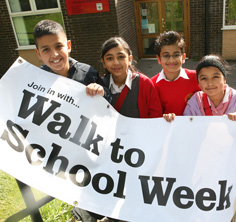 The Walk to School Week is an adjunct to the Fit Kids challenge that also incorporates No Junk Food Week and no TV/Video Game Week, at least in Rye Neck.  Anyone else notice how much of your time this stuff takes?

It’s no secret that some kids are pudgier now than in our day, but in our day, walk to school week was pretty much every week with your mother pushing you out the front door to meet this goal.  Try that yourself and wait for Family Services to come knocking.

Peer pressure forced me to participate along with the prediction that it might rain at least one or two days -it didn’t.  No rain and a strategic husband with early morning meetings forced me to pack up the toddler twins in their stroller, sometimes not in pajamas.   Max was enthusiastic, waving at friends on his new Trek bike while dodging the cars on the Post Road.  A reckless worker at the Toyota Dealership narrowly missed backing over the stroller, but slammed on his brakes as I screamed expletives, causing me to owe Max another $.50 for foul language. Proud we were, puffing up the half mile hill, greeting other families with witty repartee.

So why is it that with parents being busier now than ever, they are expected to do so much more?  I don’t remember my grade school trying to win any Blue Ribbons for this mode of transportation.

Alas, excessive ‘public’ kiddie involvement is meeting its inevitable backlash.  The newly released movie, “Babies” is directed by a French guy who wants to let the world know that all the uber-activity with our offspring has made them miserable.  Recently it struck me that the reason my mother yelled at us less than I yell at my own kids is because we didn’t hang out together that much.

‘They didn’t tell me that part”, has become my mental shell-shocked mantra as I attempt to appear devoted to every school flier announcing what I should be doing this week.

Book reports?  They warn you a month in advance that, ‘this next book report is going to require you, the parent, to take your kid to the library, read the book, draft a poem, type the poem, create a miniature version of your child that is as big as he is and takes a weekend to build.’

They didn’t tell me that I would re-live my Science Fair Days, a person who never even got Honorable Mention in 7th and 8th grade.  My kid’s in 3rd, and was only marginally involved in our bread decomposing experiment this year.

Volunteer to serve pizza!  Be the Room Mom!  Get out of your damn car at pick-up and stop the idling!

These demands have kept pace with the cosmetic industry’s break-through products to make you look fresh, like less of a hag, while in servitude to your children.   For my mother and her friends, lack of jobs outside the home and grown-up activities kept the worn-ragged look at bay.

Now I have to squeeze in appointments for Brazilian Hair Resurfacing, facials and eye lash tints.  More severe measures are being teed up but kept under wraps.  Who needs to be the gal that’s talked about because she got her eyes done instead of chairing the Book Fair?

Then it struck me: my mother looked young because she was.  And to make matters worse, the older parent is supposed to know the sacrifices it takes to raise a winner.  Lose-lose.

On the Friday of Walk to School Week my husband stepped up, clearly craving la familia.  When Max got picked up for a play date after school, he left the bike at school.  No one noticed it was missing until Monday morning when he thought it would be fun to start the madness again.  Caving to school spirit, we walked and were a half hour late.

I reported the stolen bike to the school.  I went to the police station and filled out a report.

I kicked myself for forgetting about the bike.  I berated my husband for buying the kid a bike that cost more than mine.

The officer wanted to know if we wanted to press charges-against myself?  Guilty as charged for not being on top of this one!

Friends with grown kids have said they’d kill themselves if they now had the job of raising twin boys.

If nobody’s looking it will turn out just fine.

Kim Berns is a writer and interior decorator living in the Rye Neck School District.