Out of nowhere the cop was standing next to my parked vehicle.  "Are you going to open the window?" 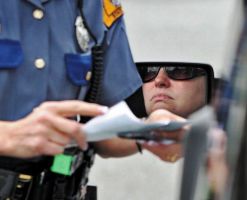 I wanted to say no but thought better of it not wanting to get cuffed for resisting arrest, or fleeing the Trader Joe’s parking lot, creating a slow-mo O.J. chase down the Post Rd.

I opened the window before clicking off my parents, the culprits behind my being clearly followed and shiftily apprehended.  I gave the imposing officer my driver’s license as I tried to explain that the call was to discuss a dying relative.  Wasn’t it unethical to hang up on one’s parents?

Fumbling for my registration the officer settled for the insurance card and went to his vehicle parked somewhat behind me across two parking spaces.  I got out of the car to wave my registration card at him which I found folded in half, not in my wallet.  He waved me off like a guy who you promised you aren’t cheating on, but doesn’t buy it anymore.

I worried that I never saw him following me.  Could he do that?  Was it worse to think that you could have a squad car on your backside and be oblivious?  Wouldn’t that be the number one reason for his disinterest in engaging my type?

Back in 2001, New York passed one of the nation’s first hands-free cellular laws.  Since that time, the New York police department alone has handed out over 300,000 tickets at around $100.00 a pop.

It could have been more.   A lady traffic cop once blew her whistle in my window and then through clenched teeth yelled, "I’m standing right here and you are still on your phone", as she directed vehicles toward the Williamsburg Bridge.  While cradling the phone between shoulder and ear I explained that I was getting directions to N.J. and was really in a pickle.  She waved me on, her eyes rolling to the back of her head.

Then I got my minivan that has a built in blue-tooth.  I was hands-free.

Couldn’t the Village of Mamaroneck officer hear my story: dying relative, a new phone not programmed into the car because the last phone mysteriously went missing on a family vacation costing me the out- of- town lost phone headache and $188.00.

The Mamaroneck officer came back to my window and tossed the ticket at me.  He walked back to his squad car without a word.  I had a flawless record.

Sure I had been stopped by the police, but I had never gotten a ticket.  In fact the offenses were actually serious in hindsight, but I was younger then, and I don’t say that only because I was less wise, but because I was better looking.

There was the time I was stopped going 85 miles an hour in a 65 zone but was spared the ticket-forget the Open Container law, this was Texas!- but was let off complaining that as a poor college student I wouldn’t have money for that, and to buy my family Christmas gifts.

Then many years later driving up a long stretch of lake front in Chicago, I was stopped near my home town, dreading to appear on the infamous DWI pages of the local paper.  But I gallantly not only walked the straight line, but when asked to do the alphabet I did that, and I did it backwards, a trick my grandpa taught me. Sold.  Good thing my striking young person looks distracted that officer from noticing my gal pal in the car splashing her wine against the window.

Having taken the unofficial, ‘driving while chatting’ poll, anyone with any sense doesn’t.  If you must, you do the lap-drop when a police officer is around, making my $185.00! infraction a perfect self-loathing platform.  Who gets trailed to a grocery store parking lot and nailed?  I had seen the high school kids and gone around them.  I hadn’t hit the random carts littering the lot.

I’ve even been nailed lately for leaving my car sitting in one of the Rye pay station parking lots for a total of 10 minutes, tops.  I fought one and lost, explaining on the back of the ticket that the then new Pain Quotidien had really slow service.  Clearly this was not a Judge Who Lunches reviewing my claim.  When I ran into an ousted city council person I asked him how often they really check those things, he said never, and I promptly got another ticket the following week for not feeding the meter at all.

Bad ticket karma?  A girlfriend told me years ago her auto had a ticket on the windshield.  The offence?  Leaving a baby unattended in a parked car.  When she told the judge that there was a nanny who was also asleep in the car, she was forced to pay the fine anyway.  Shouldn’t the officer have noted the abandoned infant and contacted the proper authorities?

It’s random.  When my dad was stopped for speeding on the way to his father’s funeral-the alphabet grandpa- the officer let him go, instructing him to be cautious.  On the same highway years later he was stopped on his way to his mother-in-laws funeral.  He got a big fat ticket, the officer clearly not believing that his lead foot was grief induced.

I ended up paying the $185.00. They want it by check or money order sent certified mail.  I was told that no one cares why you were on a phone and that telling it to the judge is a big waste of time.

I called the police headquarters at the Village Of Mamaroneck and explained that I was doing a story and was curious about their policy.  This officer assured me that in most cases you are given a warning on first offense but that the officer has the right to pull you over if he sees you on the phone.  When I explained that I was parked and that the officer did not discuss the ticket with me, he said, "you can plead not-guilty".  When I told him that I had paid the fine, not having the time to appear in court, he said nothing.

I should have asked him whether he thinks New York will impose an Aggressive Driving law.