It’s not everywhere you can shoot a bow & arrow and become a certified scuba diver, but in Mamaroneck, within a mile radius, 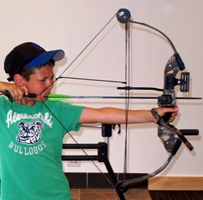 you have both Extreme Archery and AquaVisions Scuba Ltd.,

Extreme Archery (801 East Boston Post Road) opened its doors in early June with a full pro shop boasting adult and child equipment, bow tune ups, custom and stock arrows and a 20-yard indoor archery range. With a second range being built downstairs, and an upcoming "Hunter’s League" for kids and adults, owner Tom Ardis says "the population is here…it’s the kind of thing that a 10-year-old kid can do and 65-year-old woman can do." Such a great potential population of archers, in fact, that Mr. Ardis believes the store will need to be expanded in a mere two years, simply from the demand he has seen thus far.

Although AquaVisions Scuba (118 West Boston Post Road)  has been a fixture in Mamaroneck for ten years, it did not gain much recognition until its move to its new location across the street from Harbor Island. The store carries all the necessities from wetsuits to diving tanks. The main draw to AquaVisions Scuba is the three week scuba diving certification course. This service allows locals to become certified to dive anywhere in the world. Currently, AquaVisions runs classes right out of Harbor Island, taking kyacks out about twenty minutes and diving in the Long Island Sound. AquaVisions owner Bradley Gaiser says, "on a really good day, slack high tide, you have 8-10 feet of visibility."

With the success of Extreme Archery and AquaVisions Scuba Ltd. and with many other new retailers and restaurants, the buzz about Mamaroneck is that it’s a Village that supports small businesses.