The Mamaroneck Tigers season came to an abrupt end last night in a 5-4 lost to the Lakeland/Panas Rebels. 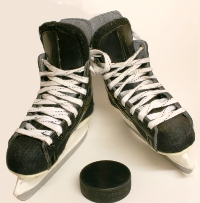 Joey Naclerio put the Tigers on the board early in the first period with a goal through the legs of Lakeland/Panas goalie Nick Chiapparino. However, the Rebels quickly struck back with goals by Robert Caffrey and Nick Belger before the period’s end. In the second period, the Tigers wasted no time by notching to goals within the first few minutes of the frame, one goal by Mike Wojciechowski and one by Matt Conner. Still, the Rebels were able to keep pace with the Tigers by another goal by Caffrey in the second period.

Finally, in the third period of action, the Tigers’ Scott Hagan lit the lamp on pass from Nick Plett to put the Tigers up 4-3. At this point, with the Tigers in the driver’s seat, it looked as if the Mamaroneck fans should have started to get their cars ready for West Point. Unfortunately, Lakeland/Panas never gave up, and Belger put the Rebels back on the board moments after Hagan’s goal. Then, with just a minute and a half left in regulation, Caffrey slipped through the Mamaroneck defense, sliding the puck through the five-hole of Tiger goalie Alex Harwood.

The Tigers’ 5-4 loss marked the end of their two-year reign as sectional champions, and it was the team’s first home loss in regulation play in almost two years.