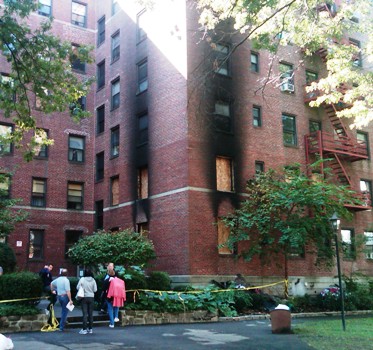 after the building was rendered uninhabitable by an early Sunday morning blaze, Town of Mamaroneck police said. Crews are working to restore electric and gas service to the building.  Town officials cannot estimate when the building will re-open.

The fire, which forced the evacuation of the six-story building, was first reported at about 4:30 a.m. Sunday in the complex’s six-story building 4.  The blaze appears to have started with a space heater in a first floor unit, Town Supervisor Valerie O’Keeffe said in an email.

Just one individual reportedly became ill at the scene, and was in good condition by Sunday afternoon, she said.

The Westchester County Department of Emergency Services, along with the Red Cross, set up a temporary shelter at the local VFW for residents on Sunday. The shelter has since closed, said Town Administrator Steve Altieri. "All those displaced by the fire were placed in alternate housing either by their own means or with the help of the Red Cross.  Our Building Department is working with the building owners to expedite the work necessary to re-open the building in the shortest period possible."