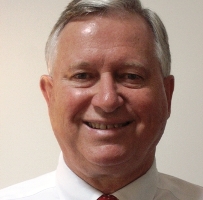 According to the release:

Superintendent of Schools Dr. Robert Shaps announced at yesterday’s Board meeting that John Goetz, former "Connecticut High School Principal of the Year" and an experienced superintendent, will serve as interim principal at Mamaroneck High School during the coming year, effective today.  Goetz, who was interim principal last year at Stamford High School, has been in education for 41 years.  Additionally, Dr. Shaps welcomed Katie Andersen, who began her role as assistant principal at Chatsworth Avenue School.

"We’re thrilled to bring on board a very experienced principal of two successful school systems and eager to welcome John to Mamaroneck Schools," Dr. Shaps said, following a Board of Education meeting in which Goetz was approved by the seven member Board.  "We believe John’s collaborative and motivating style of leadership will create an atmosphere for growth at MHS and lay the groundwork for our next principal."

The District began its search for a new principal following Dr. Mark Orfinger’s announcement of his retirement last April.   When the search committee – made up of parents, students and staff — was unable to find the right candidate, it shifted its focus to finding an interim principal to lead the school during the 2010-2011 school year.  A new search to fill the position on a permanent basis will begin in November.