With memories of the floods of April 2007, several municipalities are anticipating rising waters this week with 5 inches of rain expected Tuesday. 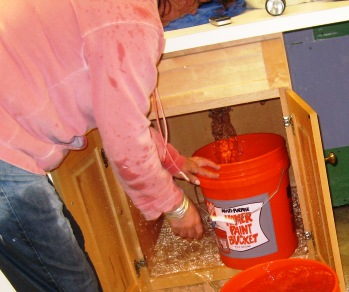 In Rye, the YMCA will be closing early to install flood gates, as the Blind Brook runs alongside. See story in MyRye.

And as LoHud blogs report, Larchmont and Mamaroneck are dealing with the anticipated flooding by lowering the levels on the reservoir. 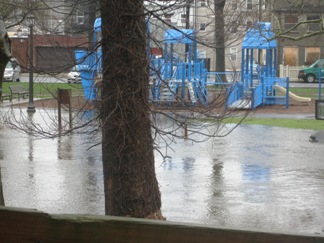 Due to continuing heavy rains, and the rising rivers, the Village of Mamaroneck is declaring an emergency and recommended evacuation of the low lying areas and neighborhoods between the NYS Thruway and the Metro North Railroad.  This also applies to anyone who needs to leave their homes in the Heights section of the Village along the Mamaroneck River.

Parking regulations have been suspended in residential neighborhoods, so that homeowners may move cars out of low-lying, flood prone areas.

A primary shelter is being set up by arrangement with the Town of Mamaroneck at the Veterans of Foreign Wars building at 1288 West Boston Post Road, Route 1.

A secondary shelter to take evacuees is being set up at St. Thomas Church at 168 West Boston Post Road, Route 1.

People may use these shelters as a place to stay dry.  The VFW will be providing light refreshments.

The Town’s Bus will be setting up for transportation at Old White Plains Road and Madison to get anyone out of the area who does not have a vehicle, starting at 2:15 PM.

We recommend people leave the area now, since you may not be able to leave later, and due to flooded roads people may become stranded.

If anyone is experiencing an emergency, you should call 911.  The Police Department non-emergency number is 914-777-1122.