The Mamaroneck Tigers Pee Wee B team capped off a stellar season on Sunday at Elmsford WSA, winning the HVHL Championship game 3-0 over a tough Pearl River team. 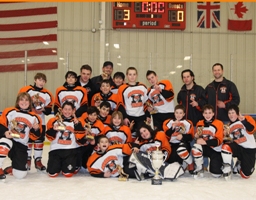 Pearl River was the only team to beat (15-1) in league play during the regular season.

The game remained scoreless after a hard-fought first period, and Mamaroneck  Both goalies, including Jarrett Schupak of Mamaroneck, came up with big saves.  Early in the second period , Jimmy McMillan ripped a shot past the Pearl River  The game remained tight until late in the second period when Tucker Leicht scored when he pounced on a rebound of a Ryota Yamaki shot, giving Mamaroneck some breathing room. knew they had their work cut out for them. goalie on a 3 on 1 breakaway unassisted to break the scoreless tie.

Early in the third, Yamaki scored on a pretty play assisted by linemates Chris Conley and E.J. Katz to put the game out of reach.  The rest of the way the Mamaroneck defense and Shupak held on for the shutout.

The team ends their season with tournaments at White Plains Ebersole and Lake Placid over the next two weeks, with a non-league game at Hommocks Ice Rink this Sunday 3/7 at 6:40pm against the Browning Panthers in between.