I am pleased to report that the MIL had a job interview last week! How did it go, you ask? Did she get the job? 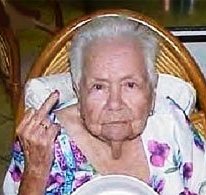 Off she drove to the interview in a light rain, which soon stopped. But lo! The wipers kept going! She sent a text message from the road (watch out, pedestrians!) asking us how to turn the wipers off. But whatever we wrote back didn’t do the trick, so she returned to the house for assistance.

Wipers off, off she set again, already late for the interview. A couple of hours later she returned.

How did the interview go? Well, she never found the location, so she drove around aimlessly, failing to call the phone number as she had not bothered to take it with her. Then she drove to the most expensive grocery store in Scarsdale (anyone, anyone?) and came home with a bunch of goods.

Oh, but the MIL does love to spend the dollars! Like all residents of the area, we are required to break down our cardboard boxes for the recycling truck, not leave them in big random piles filled with packing peanuts. But the MIL gets her package of fancy crap and drops the empty box on the kitchen floor. As I was emptying out the &$%#%$ peanuts from the last one, a receipt fell out and popped right into my hand. Should I have read it? No. Did I? You betcha! It was for a $90 face cream.

Did I mention that we might not be able to pay the mortgage next month and have specifically asked her not to contribute so that she can save money to leave our home? New shoes, new gizmos, new books, and anti-aging products continue to arrive, each with a hefty price tag, which leaves one to wonder:

For whom is she saving this pristine face? For it is certain that she never leaves the house and exhibits the lovely visage to anyone but the cashier at the local Stop N Shop and a few hapless citizens who pass her on the way.

Like a vampire, she avoids the sun religiously. Light and air will also shrivel her into into a puddle of doom.

But the other weekend she did show the face to the world, and more! A kind friend had offered to spirit me away on a special "spa weekend," all expenses paid, knowing that I have a bit o’ stress in my life. Off I went.

While I was away, she went off to the grocery store and happened upon a neighbor who must have recognized her by the tilt of her beret. The neighbor offered her a ride home. She accepted. During the car ride:

Neighbor: So, are you all alone this weekend? Did the family go away?

MIL: No, SHE went away to some kind of fancy spa!

MIL: Leaving ME holding the bag to take care of HER children. UHHGHh!

At which point the MIL exhibited a famous gesture known as "flipping the bird." It went out into space, a figurative F-you to me, wherever I was in the world. The neighbor recoiled a bit and kept driving…wondering, deep in her heart, what was the matter with the crazy old biddy. The reality was that she didn’t lift a finger to help the weekend I was gone. Dear Husband did everything and she hid in her room like a mole.

Now whenever we see that neighbor we flip her the bird, in a friendly sort of way.

The incident made me wonder if the MIL has been reading these posts. (If so, MIL, your rear-end looks fat despite those new diet pills.)

And then some other things happened that made me wonder even more. Things started to go missing, things I care about. Vanished into thin air. My gym shoes. An important book. We never found them, although we searched for days. I didn’t put two-and-two together until I came down the other day and found my brand-new (albeit cheap) sunglasses smashed and broken on the kitchen table. They had been fine the evening before. I suddenly had a clear vision of the MIL clutching my shoes to her chest as she strode off to the grocery store, and hurling them into a dumpster. Is she that childish and pathetic? Yes! But gee, MIL, the sunglasses were a little obvious. You should have been more careful.

"Is there a ghost in the house?" I asked my kids.

"No doubt, a ghost," said the eldest.

"A malicious sprite!" I offered, knowing that old Eavesdroppy Mcgee was listening above.

"I sure hope the sprite doesn’t harm anything else in the house," I added.

"I certainly think the sprite could do some damage."

"Oh yes," said the children, filled with glee at the thought of the Malicious Sprite.

Two can play at that game. My personal Malicious Sprite likes to steal old, tattered slippers and toss them over the fence to the neighbor’s dogs.