Golfers who are seeking relief from their Masters week itch will have to scratch Saxon Woods off their list of places to find a cure. 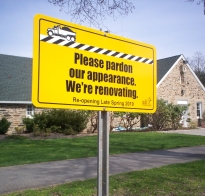 While the construction work continued on Tuesday at the 18-hole Scarsdale course, manager Paul Carnevali said he couldn’t provide a definite date for its 2010 opening. He is hoping it’ll be ready by June 1 at the latest.

"Obviously we want to get it open as soon as possible," he said. "We’re moving along."

The course began its major renovation project last fall, but last month’s rainy, windy weather slowed down the workers’ progress. On top of the muddy conditions, the course lost about 100 trees during the storms, including 20 that were a major part of the course’s design, Carnevali said.

Once completed, the county-operated course will feature all new bunkers, a continuous cart path throughout the course, as well as new irrigation and drainage systems.

The 6,293-yard Saxon Woods Golf Course was designed by Tom Winton and opened to the public in 1931. Its character and shot-making requirements make it a favorite among area golfers. It is one of six courses operated by Westchester County.

"I’m not gonna make any guarantees," Carnevali said of the opening date. "We’re working hard on it."

The course’s restaurant has also been closed this spring. Along with the clubhouse, the Saxon Grill is getting a new roof and should be ready for diners within a couple weeks, Carnevali said.