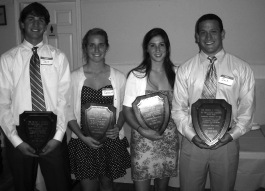 June 17 at its 51st Annual Awards Dinner at the American Legion in Flint Park.

The winners this year from Mamaroneck High School are Heather Noto and Jacob “Jack” Miller and Georgia Richardson and Jeff Colangelo from Rye Neck High School.
Noto, a two-sport varsity athlete, played field hockey and lacrosse and was voted an Academic All American by the National Field Hockey Coaches Association and was named to the State All-Tournament Team. Heather is heading off to Washington College.
Miller, a two-sport varsity athlete, was captain of both the football and wrestling teams and was selected as a Golden Dozen Scholarship award winner for football, as well as a Con Edison award winner. Miller is bound for Washington University in September.
Richardson, a three-sport athlete, played varsity soccer, basketball and softball all four years of her high school career. She is a member of the National Honor Society, a NYSSMA vocalist and a Blue Ribbon Scholarship winner. Georgia is headed for the University of Michigan.
Colangelo, a three-year varsity baseball player, was elected All League in his junior and senior years. He also played two years of varsity football and one year each of varsity basketball and bowling. He was on the high honor roll. Colangelo will be heading off to Boston College in the fall.
The Old Timers’ Association, founded by Charles Gronberg, has been presenting this prestigious award since 1957. Its membership includes more than 150 residents from the Larchmont and Mamaroneck communities who have a passion for high school athletics, both past and present.
This year’s award was renamed to honor Tom Connell, former president and treasurer of the organization, who recently passed away. Tom was the “glue” that helped to keep the organization together. Connell’s wife, Alice, and family were on hand to accept a special award in his honor.
For more information about the Old Timers’ Association of Mamaroneck-Larchmont, please contact Skip Pennucci at (914) 424-1823  or e-mail him at thegolfwarrior@aol.com.

–Skip Pennucci contributed this story. He can be found most days behind the counter at Village Paint in Larchmont