You’ve probably spotted the new orange/gold and blue New York license plates.
When attached to an old vehicle, you’re swept back to the 1960s, the last time these colors were featured. 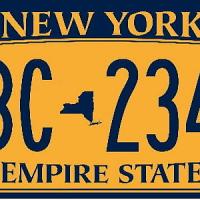 Were the Albany decision makers nostalgic for a time when the state wasn’t broke and the roadways were inviting?

According to Commissioner David Swarts of the DMV in Albany, new plates are issued every ten years and this year, “we are proud of the new retro design of the new Empire Gold plate and we are pleased to offer it to the motoring public.”  The DMV, the notoriously bad date of government agencies, was thrilled to finally offer the public the invaluable service of issuing plates that only look good on a ’67 Mustang or an unmarked squad car with Karl Malden behind the wheel.
For 30 something years the plates have been white and blue, soft, unobtrusive colors that complemented almost any car paint tone.  But maybe that’s the problem, maybe the cops had trouble reading the numbers on get-away cars and chronic speeders.
I tried to call the State Troopers office to see if those guys had some input into the design.  Was there a new metallic substance mixed in the paint that makes the new plates stand out at night?  Or are they just graphically annoying during the day?
The one thing I found out is you can’t call the State Troopers.  But you can e-mail them.  I couldn’t help but get caught up in their website; wouldn’t it be more fun to talk to someone in Forensics, or in the Pistol Permit Bureau?  Alas, they did respond to my e-mail, and referred me back to the NYS DMV who when I first phoned –they will give you their number- were closed at 4:01 p.m.
Missing on the new plates is the cityscape, another nod to Albany no doubt where delusional leaders assume they’re running the state, not Manhattan.
So do you need to get new plates?  Yes if you are applying for a new or original registration, or if your plates are lost or stolen.  If the new plates offend you, you can keep your current plates when you renew your registration.
In an effort to keep New York from being the second self-important state to declare bankruptcy, the new set of plates cost twice what they used to; $25.00.  You can even keep your current license plate number for an extra fee, a feature that seems only valuable for a cell phone, but people get attached; short term memory and attention span issues run rampant.
If you have personalized plates, you can obtain the Blue and Gold, and the annual fee remains the same, an extra $20.00.
After setting my sights on getting to the bottom of this distraction, I started noticing the number of vanity plates and wondered what drove people to want to let their car speak for them.  Was it the vehicle itself that was the impetus, or the driver?  When I had to trade in my Jeep for a minivan, my plates went from DVA to ERC.  Coincidence?
I made a list of the cars and their messages, on many occasion almost ending up in their back seat as I attempted to pull the pen and paper from my handbag.

GRANDWADY drives a Toyota Tacoma-that Grandwady and Elmer Fudd are the same person;
SELF1SH drives an Escalade-did she mean to say she loves Shellfish?;
BENZ 35, Mercedes Wagon-birthday gift my lovely?;
RAINBOWS, Subaru Compact-praying for a pot of gold in her current heap;
FITDIVA is a Hummer gal-only The Terminator comes to mind;
SUPPERR drives a Honda Accord-continual struggle via affirmations,
PWRLFT, Dodge Ram guy-would like to have a shot and a beer with you;
1 EXIT 1, Avalon, by Honda- the world is ending;
4RONIT, this catchy driver owns a Chrysler along with three other people; and
CHERRI1, a Ferrari driver-don’t want to know.
This last entry was reported to me by friends in Chicago.  The car and its plates was a gift from my high school boyfriend to his current, to be fair, only wife.  Not long after I heard about this garish gift, I had a dream that I was arrested loitering at the gates of his estate.  And not unlike the elusive State Troopers and the intrigue that comes with being on the outside, a little information can be a dangerous thing.
In the end I did get a call back from Ken at the DMV in Albany from the Communications Unit.  He told me that the plates were designed with the Governor’s Office, not a particular bragging point if he were to ask me, which he didn’t.  He said the on-line system for renewing or registering were ‘extremely efficient, all automated’, and that the turn-around time was around two days.  I’ve stood in line longer than that at every DMV office I’ve been to.  He seemed incredulous when I asked about the public’s reaction to the new design, in a sort of ‘thou doth protest too much’ sort of way.
I had read the Rules and Regulations about plates, a notable rule being that it is at the discretion of the commissioner not to issue lewd, lascivious, patently offensive etc. personalized plates.  Ken didn’t seem the type to pore over the possibilities of some such plates on the phone.  After all, this wasn’t the Governor’s Office, or the State Troopers for that matter.
editrix: i kinda like them
Life By Design is written by Kim Berns, a designer living in Rye who drives an SUV.