From police complaint reports around theLoop last week. None of this was made up… (we couldn’t) 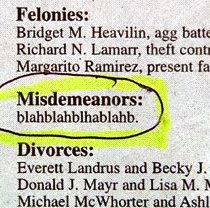