Stolen:  violins, Bloomingdale’s merchandise and a whole lot of groceries…. 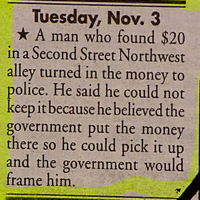 A Bronx woman was arrested on 1/27 after she entered the TD Bank on Chatsworth Ave and attempted to cash a fraudulent check.  Thesuspect was charged with attempted larceny and criminal possession of aforged instrument. She was arraigned and remanded to the WestchesterCounty Jail.

A man reported damage to his vehicle on the front side quarter panel.  The car was parked in a numbered parking space at Larchmont Acres on Burton Road the prior evening.  January 28

A 21 year-old man was pulled over for a traffic stop at 220 Jefferson Avenue.  After it was discovered that he was driving on a suspended license, he was arrested and given a moving violation.  He posted bail of $100 and is due back in court on February 4.  January 29

A 41 year-old woman was pulled over for a traffic stop on Palmer Ave.  She was found to be driving with a suspended license and arrested.  She posted bail and was released.  January 29

Officers pulled over a 25-year old man for speeding on Mamaroneck Avenue.  He was found to be an unlicensed operator. Additionally, the officer had reason to suspect he was intoxicated; he was arrested and administered a DataMaster test.  Upon further investigation, the man was found to have a suspended license. January 30

A 55-year old man was pulled over on a traffic stop 100 Fenimore Road.  He was charged with a DWI and aggravated unlicensed operation of a motor vehicle in the first degree, a felony charge due to numerous prior suspensions of his driver’s license.  January 30

There was a complaint about youths in a school bus during the weekend, at the Mamaroneck Avenue School. Officers observed one youth in the immediate vicinity and questioned him.  An attempt was made to contact his father.  The youth was released.  January 31

Police responded to a report of an accident at 117 Library Lane.  A 56-year old man was arrested for DWI and administered a DataMaster test.  He was released into the custody of another man. February 1

There was a report that a tree branch had fallen, damaging a car parked in the driveway at 204 Brewster.  The tree originated from 202 Brewster.  Police attempted to contact both homeowners but there was no answer at either home.  January 25

Two violins were reported missing from the Quaker Ridge School on Weaver Street.  The parent reporting the missing items estimates that they were taken during the school day on January 13.  Police are following up.  January 30

Dobbs Ferry police reported a missing person, 47-year old Amy Tulevech, and her two children, a son age 11 and a daughter age 7.  Amy has been known to frequent the Quaker House on Popham Road and has a history of psychiatric problems.  She was seen in the area of Post Road and Murray Hill on January 27 in a gold Toyota with unknown registration.  Police are continuing to canvass thevillage in pursuit.  January 31

A woman reported her Apple MacBook missing from her car which was parked in the driveway of her residence at 10 South Woods Lane. January 7

A 79-year old woman residing on Wayside Lane complained that she was receiving harassing phone calls.  The latest call, that prompted her to contact police, was from a man who identified himself as “Mr. James”.  The man called her by her first name and demanded $2.5 million dollars in cash.  When she refused and threatened to call police, he said “I’ll swipe your bank card and wipe you out.”  This matter is under investigation.  January 19

Police responded to a call from an employee of LF Sportswear on Boniface Circle about a possible shoplifting incident.  The employee observed three females, in their late teens or early twenties, in the store with open bags, acting suspiciously.  The women left without any purchase and drove away in a white BMW SUV with Connecticut license plates.  January 31

A scofflaw vehicle with $200 in outstanding fines was impounded and towed from Lot 3 on 1/26.

A scofflaw vehicle with $475 in outstanding fines was impounded and towed from Lot 3 on 1/27.

The manager of CVS on Chatsworth Ave reported on 1/27 that a male entered the establishment and removed merchandise from a shelf and then fled the store.

The owner of a Palmer Ave business reported on 1/28 that a male entered the establishment and removed merchandise valued at $680, from a display case, and then fled the store.

A 48 year-old Bronx man was arrested for stealing $405 in miscellaneous groceries from Stop & Shop.  Police report the suspect pushed a shopping cart with the groceries outside without paying.  2425 Palmer Avenue.  January 30

A 1995 Honda Civic reported missing.  It was parked overnight in front of 20 Lispenard Avenue.  January 31

Taxi cab passenger picked up in Stamford, CT jumped out of taxi without paying the $70 fare.  452 Main Street.  January 31

Delivery truck driver reports that while he was unloading the truck, he saw a man go into the truck cab and take a duffle bag containing a wallet and two knives.  The driver chased off the suspect.   309 Main Street.  January 30