Lots of action in the laundromat. . . 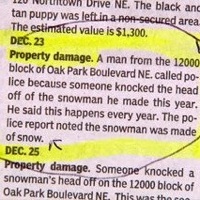 12/01 – 127 Highview Street, Petit Larceny – Complainant observed an unknown male remove an extension ladder from the rear of her premises and walk away.

12/01– 409 Mt Pleasant Avenue, Civil Dispute – Officer spoke with a male complainant who stated that he had banged on the glass window of Turkish Meze to get the owner’s attention so he could move his vehicle which was blocked by the restaurant owner’s vehicle.  They share a driveway and the complainant needed to get to work. He claims the people inside the restaurant ignored him.  Police advised the two to work out the situation on their own or in civil court.

12/01 – 309 Mt Pleasant Avenue., Larceny – A postal worker left her purse in the postal truck parked outside post office.  When she returned to the truck, the purse was gone.

12/01 – 357 Mamaroneck Avenue, Trespass – The owner of the location, which is a laundromat, reported that he had personally told certain individuals not to return to the premises, and if they did he would press charges.  These three people returned so he called 911.  All parties were brought into the police station and released after they were given desk appearance tickets.

12/04 – 145 New Street, Criminal Mischief – The French American School found the letters "KO" painted on the exterior wall and window of the school gymnasium.  There are no suspects, but the same thing was found on the wall next to I-95 at the end of Old White Plains Rd.

12/04 – Mamaroneck Avenue, Hazardous Condition – Police found assorted personal property in the roadway.  The property owner arrived on scene to report that the property fell out of the tailgate of his pickup truck while he was driving.  He also stated that other clothing was missing. Employees from 1001 Mamaroneck Avenue were asked if anyone had taken possession of the property at which time it was produced and returned to the owner.

12/04  – 102 Mamaroneck Avenue, Larceny – Complainant was at the temporary library and using a computer in the library when she noticed that her purse had disappeared.

12/05  – 100 Sheldrake Place, Exposure – A female was caught urinating in public at Columbus Park at 8:52 in the morning.  This female is also one of the three individuals arrested for trespassing in the Laundromat.

12/05  – 346 Mamaroneck Avenue, Larceny – A man left his wallet on the counter at O’Neill’s Country Store, but when he returned to get it, it was gone.

12/1 – Larceny, *** Peck Avenue –  Resident reported that someone accessed his US Alliance account and deposited an undisclosed amount of money into it.

12/5 – Harassment, 200 Forest Avenue – A resident reported seeing anti-Semitic leaflets littered over the sidewalk during an afternoon walk.  Police are investigating the matter further, but as yet have no leads. (see similar incident last week in Scarsdale)

12/5  -Destruction/Vandalism – 1 Depot Place – There was a fight outside Rye Bar & Grill between a man and woman, during which the man smashed the woman’s blackberry on the ground, damaging it beyond repair.

12/02 – Suspicious Activity, *** Huntington Avenue – Caller reported that a white Saab car with a NY license had plate had been sitting outside her house for the last two days. Police arrived at the stated address, but could find no car.  The caller swore she saw it and advised them that it probably drove off as the patrol car approached.

12/4 – Suspicious Activity, 18 Stonehouse Road – Police responded to the homeowner at the stated address, who said that an SUV with NY license plates was parked across the street in front of his house three times last week.  Homeowner stated that each time he went to turn on the lights to check, the car would leave.  The police questioned the driver of the SUV in front of a house on Chase Road North, where he worked.  The driver denied being in front of the homeowner’s house at all, and his employer backed up his story.  Police advised the homeowner that they would follow up if any further incidents occur.

12/6 – Criminal Mischief, 277 Anderson Boulevard – A resident called in to report teenagers who broke off a yield sign and threw it in his yard.

12/6 – Criminal Mischief, 182 Madison Road – A homeowner phoned in to report that an someone had tampered with and ruined her Christmas decorations. Two deer decorations were knocked off and smashed, valuing about $30.  The homeowner requested that police patrol is neighborhood more often to prevent future mishaps.

12/1 – Suspicious Persons, 6 Greenacres Avenue – A resident called in to report two suspicious people sleeping in a green Toyota Camry at the stated address.  She also saidshe felt scared and requested assistance walking to her car.  Police checked out the suspicious people, a male and a female, who stated that they were talking and just fell asleep.

41 year-old New Rochelle man reports being confronted by two men who demanded his money.  The suspects punched him and took his cell phone and approximately $100 from his pants pocket.  Victim sustained a bloody nose and refused medical attention.  700 Main Street. December 8

19 year-old New Rochelle man reports being confronted by two men who punched him.  The victim fought off his assailants and was able to enter the building and lock the door.  59A Locust Avenue.  December 8

63 year old man was arrested after he was observed in the community room of his residential building using the computer to look at pornography while fondling himself.  80 Union Avenue.  December 2