Need we say it again?  Lock your cars, homes and lockers.  And register the car . . . 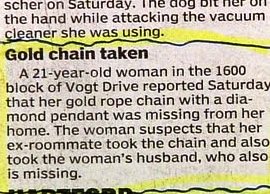 11/2 – Animal Complaint, 65 Brite Ave – Police responded to a caller’s report of a sick raccoon at the stated address.  Because the raccoon appeared to be infected with rabies, police waited until it was in a safe location and shot and killed the animal.  A construction crew working across the roadway removed the raccoon carcass.

11/2 – Criminal Mischief, 8 Depot Pl – While travelling on Depot Place, a resident’s car was attacked by eggs thrown by an unknown party.  The car, a white Volvo suffered damage to its hood.

11/3 – Attempted Larceny, 25 Lawrence Rd – A resident reported that her 2007 Honda CRV was entered while parked in the driveway of her home.  The car was unlocked at the time, and the contents of her glove compartment were scattered on the floor of the vehicle.  Nothing was missing.

11/3 – Animal Complaint, 11 Cooper Rd – Police responded to a report of two wolves in the yard, but when they arrived the animals were gone.

11/4 – Suspicious Activity, 34 Corell Rd – A caller reported a Toyota Camry in the vicinity that he did not recognize.  As patrol arrived on the street the vehicle started and drove away.  Patrol then pulled the vehicle over and found four adolescent males in the car.    When the officer asked the driver for his license, the driver admitted that he only had a learner’s permit.  As none of the other three passengers in the car had a license, the officer issued the driver a summons and told the four males to park the car and wait for a friend or relative who could legally drive and pick them up.


11/8 – Criminal Mischief, 1 Paddington Rd – Resident returned home and found her gate damaged and a street sign hanging in tree on her property.

11/3- Criminal Mischief, 496 Milton Rd – A resident reported two cars parked in her driveway overnight had the hoods scratched and nails stuck into the right tires.

11/3 – Criminal Mischief, 103 Mendota Ave – A caller reported that someone put feces on her front porch around 11 pm.

11/4 – Theft from Building, 5081 Theall Rd – Vases and China were reported taken from a resident’s house when he was out of town during the month of October.  His house was only open on the 12th and 13th of October, when carpenters came in to install new carpets.  Police are questioning the carpenters.

11/6 – Theft from a Building, 21 Locust Ave – Wallet, containing several credit cards and driver’s license,  stolen from an unlocked men’s locker at the YMCA between 4:10 pm and 4:30 pm.

11/7 – Lost Property, 69 Theodore Fremd Ave – A driver called in to report that her car plates fell off when Colonial Park Service was towing her car, and are now missing.  Her car was originally towed because she parked in a no-parking zone.

11/6 Found Property, Theall Rd – Police found a black purse in the middle of the road near the Osbourne Retirement Community.  As the purse only contained information of the owner’s son, he was called and told to give the purse to his mother.  The son believed that somehow the purse must have dropped out of his mother’s car when she was driving home.

11/7 – Destruction/Vandalism, 21 Locust Ave – Another unlocked locker at the YMCA, this time a woman’s,  and contents thrown on the floor.  Some of these items, like a shampoo bottle and a school book, were damaged.

More petit larcenies from cars.  On November 3rd and 4th,    six different houses on Old White Plains Rd, Marbourne Drive, Carriage Lane, and Wagon Wheel Road were hit.  Missing are three GPS’s, three ipods (including a brand new one), a digital camera and two pairs of high heels.   Remember to lock your cars and bring your valuables inside your homes!  One of these robberies was from a locked car – the front window was broken.  Total value of the stolen items: $1,900.00

11/5 – 24 Lester Place, Burglary in the 3rd Degree – after returning to a construction site at 9 am on the morning of the 6th, employee noticed that $1,001 in assorted construction tools were missing.


11/7 – 3 Dillon Road, Aggravated Harrasment – Complainant reports receiving numerous phone calls from a male acquaintance threatening to break complainant’s legs if he does not pay him back.  The complainant can only identify the caller by first name.

A 43 year-old New Rochelle man and his 31 year old wife both were arrested for felony assault, resisting arrest and obstructing government administration, all arising out of a car accident between the wife and a third party.  Police were called to the scene and while investigating whether the wife was DWI, the husband arrived in a separate car.  Police say the husband tried to interfere with the arrest of his wife including grabbing the police officer and fighting with him.  While the officer then was arresting the husband, the wife allegedly tried to interfere with his arrest.  During an inventory search of the husbandâ•’s vehicle, police found marijuana and other drugs in his car.  1250 North Avenue.  November 6

A 19 year-old man from Long Island was arrested for attempting to steal a Kawasaki motorcycle and a Nissan car.   In the first incident,  a security guard in the parking garage for Trump Plaza observed a man holding the motorcycle and confronted him.  The suspect dropped the bike and fled.  A short time later, a police officer observed a man of similar description standing next to a car with the door ajar.  The suspect fled on foot through backyards.   The officer found the suspect a couple of hours later on Davenport Avenue where he was apprehended.  Police also are investigating a connection with a car stolen from Stratford Avenue (see later).  175 Huguenot Street, Echo Avenue & Lafayette Avenue.  November 7

A 43 year-old Mount Vernon man arrested for possession of glass crack pipe with residue at the train station.  Officers observed a man on a bench emptying his pockets and then trying to re-stuff them as they approached.  20 Station Plaza.  November 8

A 16 year-old New Rochelle teen reports being robbed at gunpoint the previous night of an iphone and $20 cash by a man who fled in a black Nissan with dark tinted windows.   157 Sickles Avenue.  November 8

Both license plates missing from two cars parked overnight on Davenport Avenue, one a 2001 Dodge, the other a 2009 Toyota Camry.   50 and 43 Davenport Avenue.  November 8

Resident reports that someone entered bedroom through unlocked window on fire escape and took envelopes with $1550 from a dresser drawer.  3 Third Avenue.  November 8

Resident reports 1999 Honda Civic parked in backyard was broken into and driver side window shattered.  A screwdriver was found in the backseat.

A Mamaroneck Village man was arrested on 10/31, and charged with operating with a suspended registration and a suspended license on Palmer Ave.  The vehicle was impounded, and the operator released $200 bail.

A Mamaroneck Village woman was arrested on 10/31, and charged with operating with a suspended registration on Boston Post Rd.  The vehicle was impounded, and the operator released on an appearance ticket.

A Bronx woman was arrested on 10/31, and charged with operating a with a suspended registration on Boston Post Rd. The vehicle was impounded, and the operator released on an appearance ticket.

A Mamaroneck Town woman was arrested on 10/31, and charged with operating with a suspended license on Palmer Ave. The vehicle was impounded, and the operator released on an appearance ticket.

Several office suites  at 132 Larchmont Ave were entered during the overnight hours of 11/1. One firm reports $15 in US currency removed from the premises. Attempts were made at four other suites, but no other property was reported missing.

A Mamaroneck Village woman was arrested on 11/1 and charged with Driving While Ability Impaired and Assault 3 after she struck a pedestrian on Boston Post Rd.  The 56-year-old male victim was removed to medical facility.

A Chatsworth Ave business owner reported on 11/2 that he received a threatening phone call from an unknown individual.

A Rye man reported on 11/2 that he receiving a threatening phone call.

A Bronx man was arrested on 11/2, and charged with operating with a suspended registration on Palmer Ave.  The vehicle was impounded, and the operator released on an appearance ticket.

A Larchmont Ave business owner reported on 11/3 that someone entered his place of business and removed photographic equipment valued at $300.

A Concord Ave resident reported on 11/3 that sometime during the previous day someone removed property, valued at $90, from her front porch.

A Winans St woman was arrested on 11/4 and charged with operating with a suspended registration on Boston Post Rd.  The vehicle was impounded, and the operator released on an appearance ticket.

A New Rochelle man was arrested on 11/5 and charged with operating with a suspended registration on Boston Post Rd.  The vehicle was impounded, and the operator released on an appearance ticket.

A Chatsworth Ave resident reported on 11/5 that sometime during the overnight hours someone entered his vehicle and removed stereo and other equipment valued in excess of $1400.

A Mount Vernon woman was arrested on 11/6, and charged with operating with a suspended registration on Chatsworth Ave.  The vehicle was impounded, and the operator released on an appearance ticket.

A New Rochelle man was arrested on 11/6, and charged with operating with a suspended registration on Palmer Ave.  The vehicle was impounded, and the operator released on an appearance ticket.

A Iselin Terrace resident reported on 11/6 that sometime during the overnight hours someone shattered the passenger side window on his vehicle.  No property reported missing.