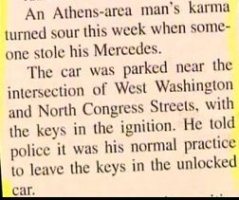 11/19 Disorderly Conduct, 12 East Pkwy. An intoxicated man was acting disorderly at the Scarsdale Train station.  Police arrived on the scene, but could not find the man in question.

A 2000 Honda Civic was found stripped at the end of Fountain Place – windows down, doors ajar, bumper missing, radio removed and trunk partially removed. New Rochelle car owner did not know the car was there.  November 21