Larcenies, trespasses and burglaries, oh my . . . 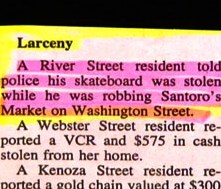 10/30 – Larceny, 505 Concord Ave – Complainant reports that between Sunday the 24th and Wednesday the 28th, several unsecured pressurized gas tanks were stolen from alongside his property.

10/30 – Larceny, Van Ranst Place – Four kids stole two bicycles from the property of complainant.  Person was able to identify the individuals and they were tracked down by police and arrested near the train station.  However, once both bicycles had been returned to the owner, the owner declined to press charges.

10/31 – Criminal Mischief, 101 Rockland Avenue – Caller reports that he observed two white males throwing rocks and eggs at his window and would like to prosecute.

10/31 – Suspicious Vehicle, 261 Madison Street – A woman found sleeping in someone else’s vehicle.  The woman refused to hand over identification and was detained for well-being.  Once identified, she was released and left via the train station and the owner of the vehicle was notified.

10/31 – 225 Mamaroneck Ave, Exposure of a Person, two counts – Police responded to a report of a suspicious condition.  A lady observed a 25-yr old male expose his penis from the second floor window of an apartment building and proceed to urinate on her.  He was brought in and processed and released on cash bail.  Earlier at the same location, a 26 yr old male exposed his penis to a male in the staircase in the same apartment building and was also arrested.

11/01 – Drunk Driver, 974 Mamaroneck Ave – The driver struck a chain-link fence, damaging the fence and the 2001 Ford Focus he was driving.  The officer who arrived at the scene observed that the driver appeared to be intoxicated and placed him under arrest.  The 28-year-old male was found to be over the legal limit for BAC.

11/01 – Larceny, 1620 Harrison Ave – Caller reports that she had firewood taken from the side of her house.

11/01 – Harassment & Stalking, 663 Old White Plains Rd – A male reports that he is being harassed and menaced by an acquaintance.  He has met with the person to get the person to leave him alone, and the last time the victim had a knife pulled on him.  Follow-up investigation was started and officers had cause to arrest the perpetrator.  He was charged with aggravated harassment on October 23rd, and was arrested for Stalking in the fourth on November 2nd.

11/02 – Trespass, 335 Mamaroneck Avenue – A caller reports a possible larceny in a local store.  The management knew the individual in question, and he was stopped, but had no property.  The manager had had a prior incident with the male in question, and he was warned in the presence of police officers that he would be charged with trespassing if he returned to the store.  He was placed under arrest for trespassing on location.

11/02 – Larceny, 805 Mamaroneck Avenue –A&P, employee observed a woman committing a larceny, and exited the store to stop the individual.  While running away,  the suspect dropped a bag filled with unpaid items.  The A&P is currently pressing charges once the individual is positively identified.

10/28 – 1289 Boston Post Road, Forged Instrument – An employee at TD Bank called the police after a 21 yr-old man attempted to cash a fake check for an unidentified sum of money.  The police arrested the individual at the bank.

11/01 – *** Copley Road, Attempted Burglary in the Second – Between 10/27 and 11/01, the victim reports that an uknown person(s) attempted to enter her home using force.  The front patio door was pried open and the rear sliding glass door showed evidence of attempted break-in.   No property is missing from the house and it is unclear if the attempt was successful.

11/01 – 92 Edgewood Avenue, Criminal Mischief – Complainant reports $500 worth of damage to the windshield of a 2009 Honda Pilot SUV parked overnight in the driveway.

10/28 – Criminal Mischief, 29 Cayuga St – Resident reported that the tires of her SUV were slashed on Apawamis Ave between the hours of 8 and 9 pm.

10/30 – Possible Larceny from Motor Vehicle, Hawthorne Pl – A black Nissan Sentra was broken into overnight while parked unlocked in the driveway.   The owner did not know if anything was missing, as the interior was messy prior to the break-in.

10/30 – Burglary, *** Hix Ave –Suspect broke into a house through a window in the master bedroom and stole unidentified jewelry.  The subject cut the screen that was protecting the open window to gain entry.

10/31 – Larceny from Motor Vehicle, 1 Guion Rd – A grey Sedan was broken into overnight, while the car was parked in the owner’s driveway. The car’s driver side window was broken and a purse containing an unknown amount of cash was missing.

11/1 – Shoplifting, 1121 Boston Post Road – A caller reported seeing a highly intoxicated male taking watches from the CVS store.  Police quickly arrived at the scene and apprehend the male who was just outside the store.


10/26 – A school bus carrying 2 youths hit a 2002 Yellow Chevy in front of 55 Morris Lane that was trying to back out of a parking spot.  There were no injuries reported and damage to the bus and the other vehicle were minimal.

10/26 – Trespass, 51 East Pkwy – Police were called by employees of a local Starbucks regarding a homeless man who had been found by an employee sleeping in the lower utility room beneath the Starbucks.  Judging by some items he had with him, it looked as if he had intended to move into this utility room.  Police told the man to move out and advised him on the location of local homeless shelters.

10/28 – Loitering; Scarsdale Train Station – Train station officials reported that a homeless man had been bothering people while lying down in the train station over pass.  Patrol spoke to the man, who claimed that he was not sleeping, but instead just resting his eyes waiting for the train.  The police advised the subject to move along if he wasn’t really getting on any train.  The subject complied and left the area shortly thereafter.

10/28 – Assistance Rendered, 47 Black Birch Ln – A mother called the police to ask for their assistance in dealing with her daughter, who had just pushed over a table in anger after having a heated argument with her tutor.  Patrol spoke with the daughter, who was calm and cooperative at that time and recommended that she see a social worker.

10/30 – Assistance Rendered, 172 Boulevard – A Fed Ex employee came into the Police department to press charges against a homeowner regarding an incident that occurred at the house at stated address on 10/28.  The Fed Ed employee said that he has picked up packages at the house numerous times, and each time the homeowner’s dog would chase him off the property.  He had spoken to the homeowner about this, and the homeowner advised him that he would keep his dog inside from 5pm – 7pm on weekdays.  However, on 10/28 the Fed Ex employee went to deliver a package and again the canine chased him down the driveway, attempting to bite him.  While running away from the dog, the employee slipped on wet leaves, fell down, broke his wrist, and shattered his elbow.

20 year old New Rochelle man arrested for leaving Stop and Shop with $24.50 in unpaid merchandise.  Suspect allegedly put items in black plastic bag and paid for some, but not others.  28 Harrison Street.  November 1

Resident reports 2007 BMW parked overnight in driveway was keyed on the left side.  2 Edna Place.  November 1

Taxi driver reports that after picking up 6 passengers in Mount Vernon, they told him to pull over at Washington Avenue and Warren Street, at which time the passengers grabbed $40 from his car visor and ran off with out paying.

Two Main Street businesses entered overnight.   Pizza parlor opened at 8:30am and discovered that someone had gone through the cash register and taken $76 cash as well as a Sony PSP that was in a bag on the counter.  Upon investigation, door to Alicia’s Bakery next door found open with no sign of break-in.  Police believe access was through basement storage area as someone cut a hole in the wall from the bakery to the pizza storage area and then climbed into the restaurant.  496 and 498 Main Street.  October 31