I had an event to attend last night in Mount Kisco, so I took at 6:59 Harlem Line train from Grand Central after work. 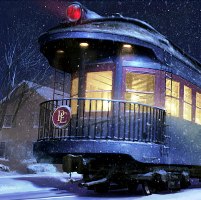 Now I know how the other half lives.

The train was almost spotless, the seats big and contoured and comfy. The middle seat actually fit the dimensions of an average adult. No pew style here with the sticky floor.

The a/c was working. The lights stayed on the entire trip. And it was eerily quiet. No conductors on the loud speakers yelling to each other;  the trip from Larchmont many mornings feels like communal  eavesdropping.

I never once had to stand up clutching my computer, jacket, blackberry and purse  to let someone “slip” into the middle seat.

And we sat. Really sat. No one had to stand. It was all very civilized. A sort of Eurail by way of Hawthorne.

The New Haven trains do have a certain communality about them.  I have read many an article, with one eye, in the magazine in the lap next to me.  I have overheard a conversation about what a house sold for, down to the decimal point. About extra-marital dalliances, about someone about to be fired. We’ve all heard the stock broker screaming into the cell-phone. Or the ACDC ringtones. None of that on the way to Mount Kisco.

Soon, however, all this civility turned eerie.  Since none of the station stops were announced, I, not entirely familiar with the cooler tundra of Northern Westchester, spent some time peering through the window at the dark looking for signs of life. And by the time I got to my stop (the trip took an hour),  I was the only one in the car. Really? At 7:30 pm?

There seem to be some advantages to what I now think of as the Polar Express, but it’s chillier in more ways than one.