The last time we were at Matsumoto restaurant on Larchmont Avenue, owner Mardy Cheng told us he was 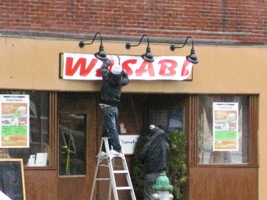 selling the business and going back to Hong Kong. This, he said, was the result of the bad taste in his mouth over the discrimination lawsuit in which he agreed to settle for $25,000. He said he planned to sell to another Japanese restaurant.

As of Friday afternoon, it appears that’s what has happened. Enter: Wasabi.