The Feds Thursday indicted 4 people in the murder of a Florida Millionaire at the Rye Town Hilton in Rye Brook almost a year ago today. 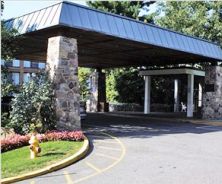 By JIM FITZGERALD of the Associated Press:

WHITE PLAINS, N.Y. — The wife of a Florida travel executive who was beaten to death in a suburban New York hotel let the killers into the room and handed them a pillow to put over his face, according to an indictment unsealed Thursday.

The victim was 53-year-old Ben Novack Jr., son of the founder of the storied Fontainebleau Hotel in Miami Beach.

Narcy Novack, her brother and two others were indicted in the July 12, 2009, slaying at the Hilton Rye Town in Rye Brook.

The indictment says Narcy Novack opened the door to killers who beat and slashed her husband, and then gave them a pillow to hold over his face as he was being assaulted.

A man who prosecutors say was involved in the attack was not among those indicted and is identified in the indictment only as a co-conspirator. That could mean he is cooperating with investigators.

Narcy Novack was arrested Thursday morning and arraigned in Fort Lauderdale, Fla.. She said little during the court session beyond acknowledging that she understood the charges. She was held pending a bail hearing set for Wednesday. Her lawyer, Robert Trachman, said she would not block extradition to New York.

Ben Novack’s father was the founder and builder of the Fontainebleau, which has been used in such Hollywood films as "Goldfinger" and "Scarface" and is on the National Register of Historic Places.

The younger Novack had a multimillion-dollar event-planning company that had organized an Amway convention at the New York hotel. He was found dead in his room there, covered in blood. His face, hands and legs were bound with duct tape. His wife told police she found him that way.

Rye Brook police quickly said Narcy Novack was not a suspect, then backtracked and called her a "person of interest," claiming she had been "deceptive" in answering questions. They also said Ben Novack had been having an affair.

Federal prosecutors joined the case months later, as family members battled over Novack’s $10 million estate and delayed his burial for nearly two months. In February, a Broward County, Fla., judge cited the federal investigation when he reversed an order that named Narcy Novack as representative for Ben Novack’s estate.

Narcy Novack’s daughter, May Abad, had claimed in court papers that her mother should not get the estate because she was behind the slaying, although she had not been charged.

The indictment alleges a plot by Narcy Novack, her brother, Cristobal Veliz, and two other men, Denis Ramirez and Joel Gonzalez. They are specifically charged with conspiring to commit interstate domestic violence and stalking. If convicted of all charges, they could be sentenced to life in prison.

The indictment says the plan was hatched a month earlier and included a scouting trip to the hotel by Gonzalez and the co-conspirator two days before the killing.

On the day of the attack, Ramirez drove Gonzalez and the co-conspirator to the hotel and Narcy Novack let them into the Novacks’ room, where they attacked him, the indictment says.

Ben Novack Jr. grew up in the penthouse of the Fontainebleau. From a young age, he had a reputation for abrasiveness, and was an aggressive businessman, building his own business after his father lost the hotel to bankruptcy.

In 2002, Novack claimed his wife orchestrated a home invasion robbery that left him tied to a chair for 24 hours. He decided not to prosecute when she told police it was an episode in their unusual sex life.

Narcy Novack also claimed her husband once broke her nose, then took her to a plastic surgeon to repair it. When she woke, she said, she had breast implants she hadn’t asked for, the police report said. No charges were filed.

Ben Novack Jr. had a renowned collection of Batman memorabilia, including figurines, books, costumes and a replica of the Batmobile featured in the 1960s TV show.

Under her husband’s will, Narcy Novack stands to inherit his entire fortune, which is at least $6 million. If she were to lose the estate, most of it would go instead to Abad and trusts for her two teenage sons.