One woman and three men have been charged with first degree robbery following an Oct. 15 home invasion on Forest Avenue in Rye. 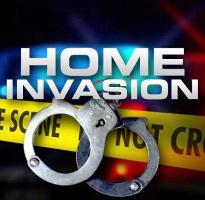 On Oct. 15 at about 11:45 p.m., Mohhamed allegedly knocked on the 50-year-old victim’s door and asked to use his phone because her car had broken down. When the victim turned to get his cell phone, the three men allegedly pushed through his door and pinned him against a hallway wall. One of the men allegedly had a gun, which was recovered during the arrest.

The victim told police he was forced upstairs, into his bedroom and was tied up face-down, with rope and his own belts, on the floor near his bed. The suspects then allegedly went through his house for about 15 or 20 minutes, returning periodically to ask "where the stuff was" and then later asking where the rest of the stuff was.

The suspects allegedly took cash, a television, a watch, assorted jewelry, the victim’s driver’s license and his phone. The property was recovered during their arrest.

“Early on in this case, we developed information indicating that this was not a random crime that posed a threat to the community as a whole,” Police Commissioner William Connors said.  “However, the potential for future harm to our victim, as well as the possibility that these people would target others in the future, made it critical that they be brought to justice quickly.

"We are confident that all four parties involved are now in jail.”


Mohhamed and Brayboy were arraigned in Rye City Court today and are being held on $100,000 cash bail or $250,000 secured bond each. The remaining two defendants were expected to be arraigned later on Friday.

Rye police worked with the Major Case Squad of the Westchester County Department of Public Safety in the investigation.

“The entire team has worked tirelessly since the early morning hours of Saturday to bring this case to a quick and successful conclusion," Connors said. "And the resources of the County Police and the District Attorney’s Office have been invaluable.”