There might be more reporters and TV news vans in Rye than coyotes. Rye City Hall was stuffed to the gills tonight with residents, officials and 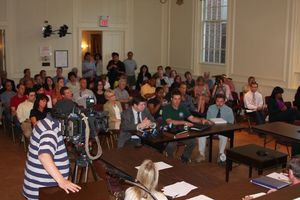 television cameras to hear the latest and greatest about man vs. wild – suburbs style.

"Make yourself a formidable foe,"  if you come across a coyote, said Wildlife biologist Kevin Clarke of the New York State Department of Environmental Conservation  who provided an informative overview of the eastern coyote.

"Punch it, kick it… don’t just roll up into a ball… do what you have to do to protect your family," said Clarke while dispensing his coyote brief. Clarke said the problem coyotes need to be removed and others in the area need to be "reconditioned" – to re-learn their fear of humans (AKA Lower Westchester residents).

All presenters – Clarke, Rye PD Commish Connors, Mayor Doug French – were consistent in their message that the goal is co-existence based on re-instilling a healthy fear of humans among coyotes. Eradication is not the goal.

Other highlights from MyRye.com:

Jay Sears is the Publisher of MyRye.com