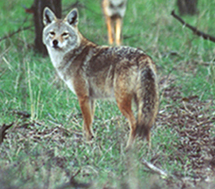 Police had received a call about a "large" coyote on Locust Avenue. When officers arrived, the coyote advanced toward the officers before it was shot, Det. Robert Chittenden said.

Residents throughout the area have had their guard up around coyotes for months, and have regularly called their local police departments to report sightings.

Last month, a Rye Brook police officer shot and killed a coyote, later found to be rabid, that had attacked three people.