Is social networking changing the the relationship of who is student and who is teacher? This was one of the more interesting issues discussed at Friday’s 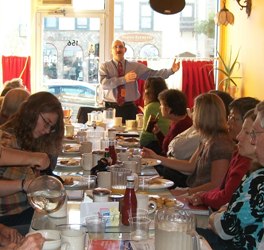 League President Elisabeth Radow noted that social networking is changing the way children communicate with each other, and asked Shaps if this was reflected in the classroom.

Shaps said that at Manaroneck High School, he had seen an AP Physics teacher using social networking as a problem solving tool, where teachers could comment directly on their work and others could share in the learning process. He also talked about an English teacher who used a blog to allow students to share ideas about a piece of writing, where the teacher could informally assess students’ progress.

"We have to talk about being socially and ethically responsible in the face of technology," Shaps said.

Another active discussion took place on the issue of teacher tenure. Real estate agent Mary Stetson noted that in her profession, younger people, often demanding lesser pay, were usually more technologically proficient and more "in touch" with the younger generations.

"If you look at teaching as a profession, a craft, the knowledge that comes with being a teacher over time," Shaps said, "I think there has to be a balance."

Shaps noted that his wife, a nurse, has to be recertified every seven years.

"To say that after four years you’re set for life, I think we have to rethink that for all professions," he said.

Dr. Shaps took the opportunity to repeat his goals for the District and to emphasize the importance of community and parent interaction with the school system.

"We want active involvement," he said. "We understand that learning does not end at 3:00. What is the value in homework? We need to understand that."

He noted that driving to school with his son when he was younger gave them the opportunity to talk about whatever was on NPR, "a learning moment."

"People in the community can also make connection  by helping students learn through service as interns, or externs."

After the discussion League President Radow said, "This gave the League of Women Voters the opportunity to meet Dr. Shaps and hear about his vision for our children. We look forward to learning how we as a community can continue to interact with him." 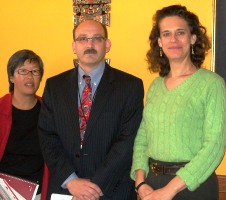