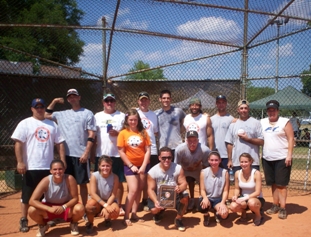 he memory of a man who spent many of his 36 years on those very diamonds.

Stephen Spina, who was found stabbed to death in his Richbell Road apartment on Sept. 17, 2007, was a beloved youth umpire and postal carrier in Larchmont. His murder remains unsolved, and proceeds from the Second Annual Stephen Spina Softball Classic are going to increase the New York State Crime Stoppers’ reward for information that leads to the arrest of his killer.

Christine Foley, Spina’s sister and a co-organizer of the event, traveled from her Florida home to attend the tournament.

"It’s really been a fun weekend," Foley said. "Stephen’s friends showed up in full-force to support this. … I know he’d be out here doing the same for his friends."

Spina’s 15-year-old daughter, Skyler, handed out plaques to the winners and runners-up. The Cellar Bar won the co-ed division and the Rogues won the men’s title.

John Boisitz, one of Spina’s longtime friends, a fellow umpire and an organizer of the tournament, said the goal was to match the $10,000 raised at last year’s tournament, but the final tally was not yet available. Donations can still be mailed to 200 Fulton Road, Mamaroneck, NY 10543.

"Steve was a great guy and he was one of my good friends," Boisitz said. "We want to keep his name out there."