Thursday night at the Emelin Theater a lucky audience had in on the first-time public performance of Lee Stringer’s memoir, Grand Central Winter. 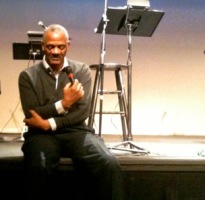 On the stage, the Mamaroneck resident’s original story of addiction and recovery was transformed into an understated work with big audience impact.

Grand Central Winter follows a difficult path from the literal underground life of addiction to the daylight of recovery. A gifted writer and journalist, Stringer tells his story using a straightforward, direct approach. Having slept and lived in the dark spaces under Grand Central Station, Stringer openly owns the crack addiction of his own former self in the ‘80’s and ‘90’s. More importantly, Stringer still possesses the skills and raw charm that helped him survive as he struggled with writing, editing and peddling “Street News”, a paper that enjoyed mainstream recognition around New York City in the early 1990’s. Like other homeless New Yorkers, Stringer hawked the paper for cash on streets, stations and subway cars, frequently at risk of collaring by police.

For this new adaptation of Stringer’s book by playwright Sean Tyler, two rows of actors dressed in black stood behind music stands on a bare stage.  Twelve men and women took their places in the back row, representing parts big and small in Stringer’s life—everything from a girlfriend and a cop to his dying brother. The play’s main focus was on the two lead actors standing closer to the audience in the front line. Representing the separateness of a younger and older Stringer, these two actors countered back and forth as battling inner voices.

By pure chance on the night of the performance, the lead actor scheduled to play older Lee was unable to appear, and the last minute replacement was none other than the genuine article: Lee Stringer. Experiencing Stringer on stage was an unexpected pleasure for everyone in attendance. With a voice not unlike James Earl Jones, and a style both relaxed and intense, I’m convinced Lee has yet another successful career ahead of him.

Read by the two Lees as a first person narrative, the play begins as addict Stringer makes a life changing discovery in his squalid, train station lair–a pencil–which happens to also make a helpful crack pipe poker. That day, Stringer saw his crack poker as something more, and literally began to write for his life. Of course, that’s not really the beginning. The chronological beginning started in Mamaroneck with a nice single mom, and a beloved brother named Wayne–the muse for Lee’s own self-destruction. Shortly after Wayne dies, Stringer crossed over what he refers to as the “fault line” in his life: taking his first puff of crack, the “single breath” that separates his pre- and post-addicted self. Later on, Stringer describes a new exhilaration, now in the form of writing, as “taking a hit.”

The play’s abstract presentation allows Stringer’s story to unfold in a gradual, natural way, working toward a final verbal sparring match between the two Lees. Young Lee, wonderfully played by actor Willie Glen, argues toward the end that he’s past addiction now—but the real Mr. Stringer lets young Lee know that he’ll always be an addict. This spirited exchange transforms the addict’s inner dialogue with his recovered self into a deeper, more direct exploration with the audience. What hangs over us is a challenge to come clean with inner battles of our own.

Spoiler alert: if your inner and outer self could duke out addiction while heating up a lonely TV dinner in Mamaroneck on Easter Sunday–with your ordinary, levelheaded self winning the battle—maybe you’ve conquered it, too, for now.

During a lively Q & A with the cast after the play, one actor described how Lee’s voice rhythms, language and patterns of talking built the underlying structure of the play and how that structure was critical to telling the story. After hearing this, and fielding several complements on his stage acting chops, the dynamic Mr. Stringer asked the audience with a wide smile, “Anyone want to ask how I prepared for the role?”

You can catch the next stage production of "Grand Central Winter" at the Kingsborough Community College Performing Arts Center on December 9 at 7 pm. Produced by Godlight Theatre Company under the direction of Joe Tantalo, the show was part of Emelin Theater’s Insights and Revelations Series. The next show in this series at Emelin, which follows the same format of having a Q&A and then a reception with the performer, is a one-man show by David Deblinger, called "Beyond Measure."

Additional information on that production is below:

Written and performed by David Deblinger. Video by Tomoko Miyagi.
In two stories – one ancient and one contemporary – David Deblinger explores volatile and hilarious connections to the word "father." From the Talmudic Story of the Pardes, which depicts the varied results of four Jewish sages entering a mystical garden in the 2nd century, Deblinger creates a beautiful multi-media piece that weaves a tale of a personal journey with a story of a loved one’s illness, leading to self-examination, renewal and transformation.