What to do with the newly spiffed up skank tunnel: 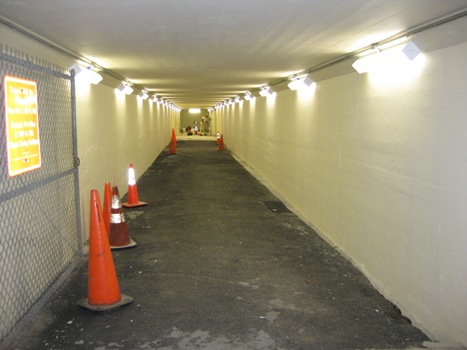 1.    Get the MIT guys (remember them? ) to construct a wormhole.  You walk in one end of the tunnel and walk out the other side at track 21 in Grand Central. Sweet.

3.    Put up a sushi bar and now ya got Nobu North.  We can still use the koi pond!   We can can ask Ang Lee to donate bamboo for that decorative touch.

4.    A jail for annoying bridge players on the train.

5.    A jail for people who annoy annoying bridge players.

6.    Give all commuters pellet guns. The rats should be much easier to see now.

7.    Put up benches and provide a reading room for people into Sartre, Jean Genet, and Beckett. The Skank Tunnel is a natural mecca for Existentialists.

8.    Make it a repository for confiscated blackberries that belonged to commuters  who loudly called their spouses to tell them that the train would be pulling into to Larchmont in fifteen minutes when it is the same train they have been taking every weekday for the last twenty seven years.

9.    Make it a lost and found for cellphones.  The loser gets to call their phone and if they can find it in 10 seconds they can trade up  People from #8, above, excluded.

10.  Seal it up and put up a plaque: The Skank Tunnel: To be opened in 20 years by Geraldo Rivera.