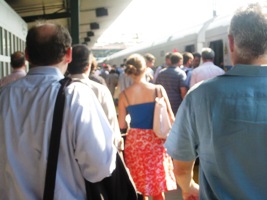 according to MTA Spokesman Dan Brucker.

At 3:15 am, as crews were moving cars for the morning rush, nine trains, or 63 cars, were blocked in by the derailment. The lack of adequate trains caused the MTA to announce that passengers from Mamaroneck to Pelham were advised to take the Harlem Line. Most delays were about 20 minutes.