Larchmont residents value their trees; the Village has been named a “Tree City USA" for the 29th consecutive year. But while children were helping plant the 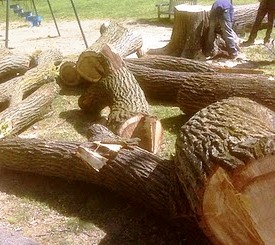 first of three bald cypress trees in Constitution Park on April 30, across town in Vanderburgh (Turtle) Park, a crew from Evergreen Arborists was taking down one of the Village’s oldest trees that had succumbed to Dutch elm disease.

The large elm tree in Turtle Park was more than 100 years old.

As the park is just across the street, I’ve been able to watch from my front porch the accelerating loss of trees in the park. Five years ago in a letter to then-Mayor Ken Bialo I wrote:

In the past two years, several large trees have been removed from Turtle Park â€• trees that provided welcome shade to the toddlers using the playground as well as others who come to rest, read, and relax in the shade provided on hot summer days. These trees were grand old trees, some more than 75 feet high and some more than a century old. (The tree removed at the entrance to the park across from our house had more than 120 rings).

I urged the Mayor to plant more trees, not ones with quick-growing with short life spans, but large trees that would shade future generations.

Fifteen years ago, when I co-chaired the Village of Larchmont’s Parks and Trees Committee, we received a grant to plant trees along the Manor’s tree-named streets. Walk along Elm, Oak, Willow, Chestnut and other Larchmont Manor streets, and you’ll see these trees which are growing into beautiful specimens.


Jan Feinman, the current chair of the Village Parks and Trees Committee, has been doing a wonderful job as steward of our Village’s trees. Under her leadership the Village hired a certified arborist to inspect our trees and embarked on a proactive campaign to prune them of diseased limbs. And so, sad as I was to see the elm tree felled, I was glad that the decision had been made appropriately.

As the arborist explained to me, the effects of the Dutch elm disease could already be seen in the Turtle Park tree’s crown. The crown often shows the first sign of this fatal and infectious disease. Pulling a piece of bark off one of the pieces of trunk laying on the ground, he showed how the fungus was affecting the wood and providing easy access to insects. Removing the tree before the disease spread to other trees was the only option, he explained.

It’s a never-ending battle to replace old trees that are damaged in storms or must be taken down because of disease, and, in this economic climate, funds are limited. Ms. Feinman estimated only 30-40 trees will be planted on Village property this year unless Village residents take advantage of a new program to donate funds for additional plantings.

Trees can be donated for $650, which includes the tree, delivery and labor, planting materials, and a plaque with information about the tree, the donor and the honoree, if requested. While donors can request a type of tree and location for the planting, the final decision is made by the Parks and Trees Committee and the Department of Public Works.

For more information or to donate a tree, please email the Village Clerk at villageclerk@villageoflarchmont.org with “Parks and Trees Committee as the subject.