We are aware there are some people out there, somewhere, who don’t twitter or facebook all day.That means that somewhere 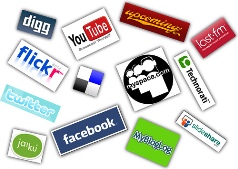 That means that somewhere is a group of people who are either not tethered to their laptops or who are not ADD.

For the rest of us, Social Media has moved out of its embryonic stage to be a regular part of cyber-life and to some, a key component of their business communication strategy.

That’s why it’s incredibly annoying (and counter-productive) when people don’t obey the “rules.”  (If there is such a thing amidst all the anarchy)

Herewith, some rules of social media:

Pick Your Site -Take the time to learn what type of audience uses a given social media site. Facebook is all purpose, LinkedIn is for business professionals looking to network; there are also specialized social media sites for individual professions.

•  Study the Content – Pay close attention to what type of content appears in which environment. This will tell you that you have targeted the right social media site for the audience you’re trying to reach, and it will also tell you what kind of content to contribute within a particular environment.

•  Learn the Site’s Language and Value System – Each social media site develops their own unique dialect. If you don’t “speak” it, you will stick out like a sore thumb to the regular users.

•  Make Friends – In particular, try to make friends with the influencers on the site. On a site like Digg, these are the top 100 users. The best way to do this is a corollary to the next point – add value to that power user. Comment on their stuff. Reference their stuff from your site, or in comments elsewhere. Suggest related things to them that is not your own content.

•  Add Unique Value to the Community – Become a member. Social media is, oddly enough, social. People who take, and don’t give, are not popular in any community. Note that adding value does not always mean contributing your own stuff. Find other people’s great stuff and contribute that.

•  Don’t Self Promote – There are almost no social media environments that appreciate aggressive self promotion. Even if the site’s terms of service say that self promotion is OK, the community itself tends to frown on it (this is true on Digg and Reddit, for example.

•  Provide Accurate Information – Don’t be lazy about fact checking. Make sure that your contributions will stand the examination of the hundreds or thousands of people who will be looking at it. You don’t want to be outed for providing bad or inaccurate info.

•  Be Transparent – This is another biggie. If you are saying something about a company that you have some association with, be open about it. You definitely do not want to be outed for that either, it will destroy your credibility

•  Be Patient – The big wins may well take some time to achieve. You are going to need to make up front investments to become a part of the community and figure out how to fit in. The right way to get the content you are trying to promote in front of the community varies by site, but following the above guidelines will cause the people who come to know you to start following you.

•  Let it Go – Once some of your content is taken into the community, the community will begin to redefine it. This is one of the trickiest parts of social media. However, if you have created something of value, this metamorphosis is extremely powerful. Those who participate in these actions will begin to take ownership for what they have created – and they will drive the success of your content / brand for you.

•   Don’t spam –  If you haven’t realized it by now,  social media communities tend to be very fast in acting on spam. Just don’t go there.

All of these sites are self policing to a certain extent, there is little tolerance for bad behavior. For example, bulk friending the friends of friends on Facebook has gotten people into trouble. Everything you do or contribute is open for review, any inaccuracy, or problem with what you are doing will be discovered immediately. You may also have people challenge you who themselves are completely inaccurate and off base. You just have to deal with that.