Hailed by the Mayor of New Rochelle for “taking health concerns and throwing them out the window,” a simple hamburger topped with a layer of 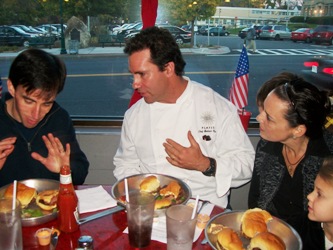 French fries and slathered with ketchup survived weeks of brutal competition and tonight was declared the official “LOOP Burger" by a panel of judges.

Besting 12 entries and tonight, two runners up, The Italiano and the UN Burger (aka The Mexican Asian Danish Delite), and the discerning palettes of three burger-loving judges, the French Fried AJ on Sunday emerged the victor in the first LOOP Build-A-Burger contest at AJ’s Burgers in New Rochelle.

The French Fried AJ – a simple AJ’s hamburger with a bunch of French fries on top – now has a permanent spot on the AJ’s menu, while its creator, Gina Ryan of Pelham, can chow down on one free once a week for a year at the New Rochelle restaurant.

“It feels wonderful,” said Ryan, who has been informally topping her AJ’s burgers with French fries as a regular diner there, adding that her big win takes the experience to new heights.

“Now it will be built for me,” she said. “I don’t have to lift those heavy French fries.” 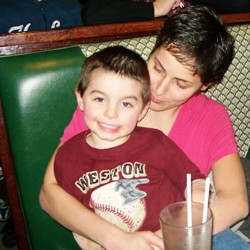 After an intense preliminary competition – -during which LOOP readers submitted, and then voted on, their favorite burger recipes – the French Fried AJ, Italiano and UN Burger (the top three recipes, according to readers) underwent an intensive taste test by Celebrity Judges His Honor Mayor Noam Bramson of New Rochelle, Her Honor Nicole Sheindlin of Larchmont, founder of HerHonor.org (and daughter of Judge Judy) and Plates Executive Chef Matt Karp.

The judges rated the burgers for flavor, creativity and appearance. The French Fried AJ, the judges said, best piled on the merits of burger joint classics. 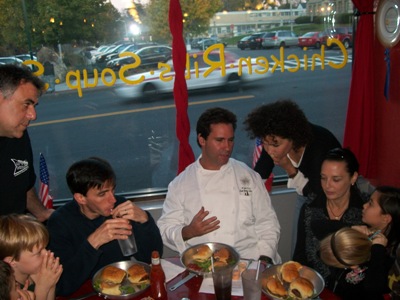 Sunday’s burger bash, which benefited HOPE Community Services, drew about 50 enthusiastic locals, who noshed on slider-sized samples of the finalists while the judging took place.

Lively, and just plain fun, the event was a coup for hamburger chefs and diners alike.

Mamaroneck High School student Harrison Frank, who created The Italiano and had a distinctive rooting section, said despite being edged out by the French Fried AJ, he was happy his burger reached the heights it did.

“I was honored to be among this group and happy to get my idea out to the public,” he said. Frank’s Italiano, which features three kinds of ground meat, fontana cheese and sauce, will now be available on AJ’s menu, as will the French Fried AJ.

Or you can make it there yourself.