As Shoshana Riss approaches the Starbucks on Palmer Avenue in Larchmont, she stops to chat with a patron seated outside. Once through the door she heads for the counter to say hello to a couple employees. Twice during an hourlong conversation she interrupts herself to trade jokes with other people she knows.

Riss, a 38-year-old Larchmont resident who grew up in Rye, likes to talk. To everyone. To anyone.

The problem is, a lot of what comes out of her mouth is difficult to believe. Some of it is downright absurd.

Lean in for a closer look at “average.”

Around Riss’ neck hangs a pendant inscribed simply with the letters “III,” which symbolize a triathlon. In the past two years she’s finished seven of them, and her eighth and final one this year will be Sunday at the Jarden Westchester Triathlon in Rye.

A second pendant that hangs from her neck is engraved with the letters “XIII.I,” which stand for the 13.1 miles that make up a half-marathon. She’s done 11 of those, and even one full marathon. She also convinced and trained her mom, Rochelle Bitton, to start doing half-marathons when she was 59, and has promised to do one a year with her.

“I couldn’t run one lap around the track in high school,” she says. “Not one.”

The third and final pendant around Riss’ neck reads LXX.III to signify the 70.3 miles she biked, swam and ran as part of a Half Ironman in Michigan. She’s vowed to don another pendant, which would read CXL.VI when she finishes the Ironman in Lake Placid next July.

“I just want to hear ‘Shoshana Riss, you are an Ironman,” she says.

There’s nothing “average” about her choice of wrist accessories, either.

Wrapped around her right wrist are two bands. One is for LiveStrong and the other is for Challenged Athletes. She has proclaimed her 38th year as a charitable year, and has raised money for Lou Gehrig’s disease, cancer survivors and athletes with disabilities.  Her employer, DIRECTV, matches all her contributions. 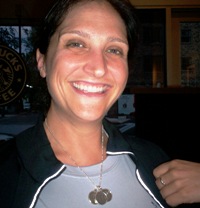 When: Sunday, 7 a.m.
Where: Rye
Who: More than 1,000 athletes will take part in the 9/10ths
of a mile swim in Long Island Sound, a 25-mile bike ride
through Rye, Port Chester, Harrison and Greenwich, Conn.,
and a 6.2-mile run through Rye
Note: The Westchester Kids Triathlon and the

Next check out her “average” fingers.

In its early stages, Riss’ dream certainly didn’t feature half-marathons, triathlons or Ironmans. A mile was even a stretch. It all started with a goal of losing weight. When Riss was in her early 20s, she weighed about 230 pounds, and she knew she needed to introduce exercise into her life. Over the course of several years, she lost 70 pounds. Now she wakes up at 4:30 most mornings to get to the Rye Y by 5:30. A typical week includes somewhere between nine and 15 hours of training, everything from lifting weights to group runs to long rides to open-water swims.

“I had zero interest in anything athletic, unless someone else was doing it,” she says. “I changed my life completely.”

Another silver ring on her finger is inscribed with the word “believe.”

Doubt is not something that accompanies Riss to her races. No matter the distance, the weather or the course, Riss has confidence in her body. She knows she’s put in the training, and crossing the finish line is only a matter of time. Nothing will get in her way.

“It’s probably the one area in my life where I’m most secure,” she says of racing. “I don’t get nervous. You really just have to show up."

The final ring on her finger is inscribed with the word “love,” and there’s no shortage of that in Riss’ life, either.

Although she has lost touch with some close friends and boyfriends because of her demanding lifestyle, her life is still full of love. She loves spending time outdoors. She loves open-water swimming. She loves the social aspect of training. She loves the views that come along with it.

“The bikes and the men are the biggest eye candy ever,” she says. “I have, like, whiplash.”

She loves the high she gets when she crosses the finish line, and she even has learned to love the pain along the way.

Just take a look at her face.

“I smile even when it sucks,” she says.